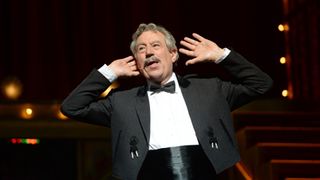 Terry Jones, who was one of Monty Python's founded members, has died. He was 77 years old.

The actor, writer, and director was best known for directing some of the comedy troupe's most beloved movies – including The Life of Brian and The Meaning of Life – and playing now-iconic characters such as Mr. Creosote. At the time of his death, Jones was battling a rare form of dementia: frontotemporal dementia, or FTD.

"We are deeply saddened to have to announce the passing of beloved husband and father, Terry Jones," a statement from his family reads.

"Terry passed away on the evening of 21 January 2020 at the age of 77 with his wife Anna Soderstrom by his side after a long, extremely brave but always good humoured battle with a rare form of dementia, FTD."

The family said that close friends and family had been at Jones' side over the last few days and the statement pays tribute to the "kind, funny, warm, creative and truly loving man whose uncompromising individuality, relentless intellect and extraordinary humour has given pleasure to countless millions across six decades."

"We, his wife Anna, children Bill, Sally, Siri. and extended family would like to thank Terry's wonderful medical professionals and carers for making the past few years not only bearable but often joyful," the statement continues.

"We hope that this disease will one day be eradicated entirely. We ask that our privacy be respected at this sensitive time and give thanks that we lived in the presence of an extraordinarily talented, playful and happy man living a truly authentic life, in his words 'Lovingly frosted with glucose.'"

Jones was an active director until 2015 when his movie Absolutely Anything – starring Simon Pegg, Kate Beckins, and various members of Monty Python in cameo roles – reached UK cinemas. He also helmed the movies Erik the Viking, Personal Services, and Monty Python and the Holy Grail. Following Python, he made a series of TV documentaries about medieval history and wrote almost 20 children's books.

Fellow Monty Python members Sir Michael Palin and John Cleese both paid tribute to Jones. Palin said in a statement: "He was far more than one of the funniest writer-performers of his generation, he was the complete Renaissance comedian – writer, director, presenter, historian, brilliant children’s author, and the warmest, most wonderful company you could wish to have."

Cleese said: “It feels strange that a man of so many talents and such endless enthusiasm, should have faded so gently away…” He added: “Two down, four to go.”