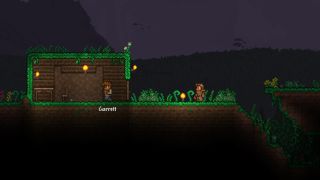 The average Terraria house isn’t isn’t for you. The NPCs you meet need somewhere to live where zombies, slimes and Demon Eyes aren’t constantly trying to bites pieces out of them. Fortunately, they have very low standards and while you might spend hours crafting a palace for yourself, they’ll make do with a mud hut, or worse the infamous ‘NPC Prison’.

If you want to know how to build a Terraria house that will keep the locals safe for when you need them, then we’ve got all the building plans and requirements right here.

How to build a Terraria house

You can build a Terraria house with pretty much nothing but basics. You’ll need a work bench to craft a couple of components but you’re otherwise ready to go from the start. To build a simple NPC Terraria house you’ll need the following:

From a work bench (any material)

Once you’ve got that you can build a basic Terraria house which should look like this:

It doesn't have to be smart, or particularly nice looking unless you really want it to. It just has to satisfy some basic criteria. Namely, having a walled in area of at least 60 tiles, a way in (usually a door but not entirely necessary, which we'll come to), a light source, a table and a chair. When adding walls you don’t have to completely seal in the space, a few gaps won’t hurt but if there are big gaps there’s a chance monster will get in. Do you want monsters?

This basic housing block can be combined to create an apartment style complex of multiple rooms. Just remember to obey the basic rules each time, and make it no larger than 750 tiles in total.

How to build a Terraria prison house

If you’re a fan of brutal minimalism and have no feelings towards the in-game characters then you can build a Terraria Prison for your NPCs. As you can see from the picture up there it’s not exactly a four star offering but it will satisfy the criteria of a Terraria house. It will also slightly trap your NPCs so they can never leave. Handy if you just want to keep people pinned down, but bad luck for your victems.

The trick to a Terraria prison is to build the ‘house’ sideways, so that it forms a column. That way it will take up minimal ground space and only occupy air. The main body is the basic 9x7 minimum, 60-ish tile volume with two wooden platforms at the bottom, either side of a block. The platforms and block will allow you to place a chair and desk inside, as well as enable NPCs to jump in but not out. If you build it just above head height you’ll be able to reach and interact with people just by walking underneath.

How to check your Terraria house

Hopefully, what we’ve told you should mean your Terraria houses will do the job. However, if NPCs aren't setting up home then you can check to see if you’ve done something wrong. Head into the menus and look for the house menu where you’ll find the option to perform a Housing Query. Enter any house that people aren’t using and use the option to query it and you’ll be told if it’s ‘suitable’, or ‘not suitable’. Okay, it won’t tell you why, but at least you’ll know if the house is correctly built or not. If it isn’t, check it’s big enough and has lighting as those are the easiest things to forget. Then check all the other requirements.