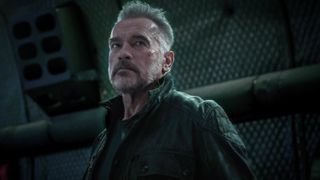 San Diego Comic Con 2019 kicked off in style with the Terminator: Dark Fate panel in Hall H, and our team were on the ground to report on everything that was said and shown.

First off, director Tim Miller confirmed that the movie will indeed have an R-Rating, saying: “The DNA of Terminator is an R-rated movie. It would be disingenuous to do so otherwise, it’s what the fans wanted." Linda Hamilton, who plays Sarah Connor, added that her favourite line in the entire series is: "You're terminated, fucker."

Speaking of the Connor family, Miller also revealed that Edward Furlong, who played John Connor in Terminator 2, will be back for the sequel. Seeing as Terminator: Dark Fate will ignore all Terminator films after the first sequel, this makes perfect sense.

New footage from Terminator: Dark Fate also premiered at the Comic Con panel. Darren Scott, the editor of SFX, was at the panel. Here's his description of what happened.

The first thing they showed was a new version of the trailer footage, in which Gabriel Luna's new Terminator, driving a truck, chases Mackenzie Davis and Natalia Reyes's character. Davis throws metal poles at the Terminator, causing him to split into two - one human, one black exo Skelton Terminator with red eyes. It pours out of the other like the Venom Symbiote.

Davis's truck is smashed off the road by the Terminator, and the two women run, but are cornered by both Terminators

“When they start to kill me, run” says Davis's blonde haired character Grace. However, a heavy duty vehicle screeches up. Out walks the one and only Sarah Connor, firing a massive  gun at the human Terminator, causing him to fall off the motorway and into the wreckage of the truck. She then turns a rocket launcher on the exo-skeleton, blowing it up. She chucks a grenade into the remains of the truck and tells the two women, “I'll be back.”

Another scene, where Connor introduces herself to the women: “My name is Sarah Connor. August 29th 1997 was supposed to be judgement day. My son and I stopped that. We changed the future. Saved three billion lives. You're welcome. Since then I hunt Terminators. Enough of a resume for you?”

We then hear Connor being asked: “Why do you care what happens to her?” She responds: “Because I was her, and it sucks. When I was about her age, a Terminator was sent to kill me.”

Cut to introduction of Arnie. “So you're Karl?” he's asked, to which the original Terminator, who lives in a lodge in the woods and has dogs now, responds: “That's what everyone calls me, yes”

Arnie: “I'm going to help you protect the girl”

Sarah: “When this is all over, I'm going to kill you”

Sarah, to Davis's character: “I've never seen one like you before. Almost human.”

Skip to another scene, where the new Terminator wants Davis's blonde bobbed character. He asks Sarah: “Why don't you just let me have her?”

Sarah: “Because we're not machines, you metal mother fucker.”

Another scene, this one in an open aircraft hangar. Arnie stands on the chest of the Terminator and shoots a machine gun repeatedly in his face, blasting off his skin and revealing the Terminator underneath.

Check out our San Diego Comic Con 2019 schedule to find out what other panels you can not miss.