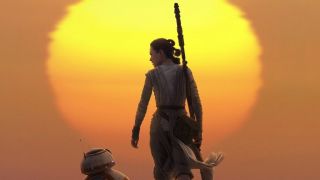 Why does C-3PO have a red arm in Star Wars: The Force Awakens? If you’re Disney, the answer to this question is less important than the fact it’s being raised at all - and if you really are Disney, you’d probably consider this the successful deployment of a brand-engagement transmedia narrative device.

First of all: Ewwwww, never say that again. Second: For a business that thrives on creating entertainment connected by familiar strands and characters, as is exceedingly the case with the Disney-owned Marvel universe, a seemingly innocuous question is the ideal prompt to spin out a new comic (as is the case with C-3PO’s crimson appendage), kickstart a cartoon, or furnish an entirely different movie with relevant plot. And the more details you fill into the grand scheme of things, the greater the sense that you, Star Wars Fan, haven’t seen the FULL story yet.

The gradual expansion of the Star Wars universe isn’t exactly new - it had already gotten so many additional stories in the old ‘Expanded Universe’ that it had to officially shed them prior to Episode VII - but those were different times. Having only three movies for years opened a Wild West for sci-fi authors and video game designers. It was a void begging to be filled. With Star Wars back in full force, you have to wonder if the void is now being manufactured, possibly as dumping grounds for thousands of red robot arms. Are we due for a novelization about the pilot and former owner of Rey’s dinner-time helmet on Jakku, for example, or can we just read the moment for what it says about the movie’s energetic protagonist?

None of this is to say Disney is wrong for seizing every way in which a Star Wars story can be told, or for creating more sequels in the wake of North America’s most successful film ever (the business case boils down to a curt DUH). But there is a right way to do it, a finesse that balances the needs of a business with the creeds of its artists, and a wrong way to do it. And Star Wars has already done it wrong once.

Ok, maybe three times. One of the biggest problems with the Star Wars prequels manifests in the universe’s tiniest forms. The midi-chlorians (you’d better believe that hyphen is canonical) are intelligent, microscopic beings that can grant you sensitivity to The Force if you have enough of them in your cells. If you’re really lucky and happen to be Anakin Skywalker, they’re also your collective dad-thing. Remember (sigh) that Darth Vader was an immaculate conception.

It’s truly a loathed explanation for The Force, but it’s egregious in robbing Star Wars of a crucial element of mystery, clumsily georgesplaining the nature of a spiritual characterization of the Jedi order. Obi-Wan Kenobi or Luke Skywalker aren’t interesting because they’re infested with magical amoebas, but because they’re attuned to the story’s central conflict, between good and evil, in a way that other characters can’t see or hear. We didn’t really need to know the rest, did we?

In fact, what’s meant to be additive doesn’t add anything worthwhile to the story, a fate which ultimately befalls Darth Vader himself. The Star Wars prequel trilogy, after all, has a hook built into the original films, with Obi-Wan’s mention of the Clone Wars kicking off the big question: What happened before all this, and who was Darth Vader, really? Now we know the answer is, perhaps, not worth knowing - and it even ends up ruining a key revelation in later episodes. Sometimes it’s more effective to leave an element unexplained, and sometimes it’s enough to know that an arm is red to indicate a lot of time has passed.

Unless, well, there’s a really good story attached to it. There’s nothing inherently bad in having a setup and a follow-through, just as there is no guarantee that quality will come if you ask a truly tantalizing question, as is the case with Darth Vader. A good story can’t count on being adequately connected to a better one, and it can’t be so entrenched as to be inscrutable to everyone who hasn’t done their Disney homework. There are plenty of examples of this sort of success in Star Wars’ old Expanded Universe - that’s why so many fans were upset by what is essentially a narrative demotion.

We’ll be watching Disney’s writers, actors and producers again navigate this territory between organic mystery and falsely enigmatic product over the next few years, as it ramps Star Wars up to levels of exposure never before felt, starting with this year’s Rogue One: A Star Wars Story. That movie asks: How’d the rebels get the Death Star plans in the first place? Again, we have a tantalizing question and a stage for new characters, waiting for an exceptional pay-off that we’ll either be glad to have seen or wish back into a state of ignorance. At the same time, though, fans may be better served if the custodians of Star Wars are just a bit inconsistent in their elaboration, leaving enough marks that imply mystery, rather than signal an upcoming explanation. The Star Wars galaxy has always been distinguished by the few things that can’t be seen.