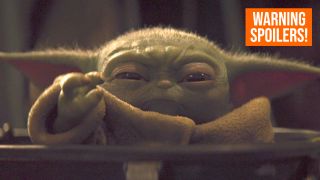 Star Wars: The Rise of Skywalker has finally reached cinemas around the world. While we still have many, many questions about that far off galaxy, we should acknowledge that – despite this being the end of the Skywalker saga – the Star Wars story continues in many forms, including The Baby Yoda show... I mean, The Mandalorian.

The Mandalorian episode 7 came out a few days earlier than Star Wars: The Rise of Skywalker and, funnily enough, actually ties directory into the new movie. How? Well, before we get into that, here’s a quick...

SPOILER WARNING. We’re going to be touching on elements of The Mandalorian episode 7 and Star Wars: The Rise of Skywalker.

Midway through The Mandalorian episode 7, Baby Yoda’s babysitters – including Mando, Greef Karga, and Cara Dune – are attacked by a group of pterodactyl-looking creatures. One of Greef's gang member is picked up and killed, while Greef himself is injured. And while he's not killed, the poison from the injury will soon kill him.

Luckily, Baby Yoda’s got a trick up his little sleeve: Force healing. The green creature rests its hand on Greef's wound and removes the poison. Baby Yoda then falls back, exhausted from the powerful move.

In the Star Wars universe, Force healing has not been used before – at least not in the new Disney Star Wars canon. However, just two days after The Mandalorian came out, the Force technique is used by Rey on a serpent and Kylo Ren in The Rise of Skywalker. We also see Kylo save Rey's life by sacrificing himself transferring his own life-force into her.

The timing is no doubt purposeful on LucasFilm's part. Perhaps they didn't want it to seem like the Force healing used in The Rise of Skywalker came out of nowhere, and therefore wanted to soft-introduce in The Mandalorian. Whatever the case, it's a lovely link between the two.

However, we still have questions. Force healing, it would seem, is a Dark Side move. Emperor Palpatine, after all, persuades Anakin to join the Dark Side in Revenge of the Sith by promising the future Darth Vader that Sith can learn "unnatural" powers such as saving another person's life – AKA Force healing.

The Rise of Skywalker is in-keeping with this. Both Rey and Kylo flirt with the Dark Side, and Rey uses Dark Side powers such as Force lightning. The real question, then, is whether Baby Yoda's actually on the Dark Side. We've also seen him use Force choke... No doubt there's a lot more to this tiny creature than meets the eye.

Also of note: in the now non-canon Star Wars novels known as Legends stories, one of Luke Skywalker's descendants, Cade, uses the Force to heal people. However, the technique is called "Dark Transfer" and is a Dark Side power (Cade was also a Sith, for a time). In the old canon, other Force users also heal other people, but Cade's story fits nicely with what we've seen in The Rise of Skywalker.