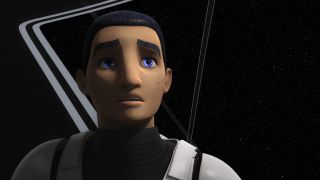 How far can Star Wars push the boundaries? Star Wars: The Last Jedi took a few controversial steps when it comes to treating fan-favourites, as did Star Wars: Rogue One. But what if it could all be undone? Theoretically, that’s now possible, thanks to (canonical) TV show Star Wars Rebels.

A hearty hat tip to the folks over at /Film for dissecting Star Wars Rebels episode A World Between Worlds. Here’s the important bit: main series protagonist Ezra has stumbled upon the secrets of a Jedi Temple on the planet of Lothal. There, it’s clear that a Jedi (or a Sith, for that matter) can travel backwards and forwards through time through several portals – as Ezra does in the episode.

While the Lothal Temple is rendered inaccessible by the episode’s end (sinking into the ground tends to do that to a place), the echoes of such a reveal might reverberate for some time to come. Firstly, the Emperor – ol’ lightning hands himself – knows about it. If he knows about time travel then there’s a good chance that knowledge has been passed down somewhere.

What does that mean for the future of Star Wars?

Honestly, probably not a lot (for now). Star Wars Rebels may be officially part of the universe, but it’s not on the tip of the tongue of most casual fans. Still, though, the possibility remains that time travel is absolutely possible – which is very exciting.

Key characters could be revived. Imagine plucking Jyn Erso from death and placing her in a post-The Last Jedi world, or putting Ewan McGregor’s Obi-Wan further into the timeline so he can finally get his own movie.

The timey-wimey scenarios are seemingly endless – and Star Wars Rebels makes a point of including the voices of the vast majority of iconic heroes throughout time. Leia, Rey, Jyn, they’re all there, just waiting to be meshed together. My dream? Let’s do a Star Wars Avengers. Chuck everyone together with the fate of the universe at stake. Han interacting with Jar Jar, Darth Maul scrapping with Finn. You know it makes (no) sense, but it could be bloody brilliant if done right.

Until you have the ability to go back in time and put away your wallet, here is our list of the best Star Wars merchandise.