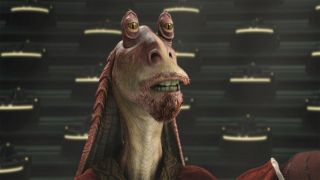 In a sentence I’d never thought I’d type, Jar Jar Binks is rumoured to return to the Star Wars universe. Not only that, but reports state that the Gungan will appear in the Obi-Wan Kenobi Disney Plus series – complete with facial hair. Just to confirm: it’s not April 1. Confused? Meesa too, but it comes from a source with a proven track record on all things a galaxy far, far away.

Making Star Wars – who had the scoop on that flashback scene in Star Wars: The Rise of Skywalker months before it hit theaters – believes that Jar Jar Binks is back alongside Ewan McGregor’s Obi-Wan Kenobi. The character was last seen in 2005’s Star Wars: Revenge of the Sith. Here’s the kicker: he might also be sporting a bit of facial fuzz “to reflect where he’s been and what his life has been like.”

It’s not yet known if actor Ahmed Best will be back to reprise his role as Jar Jar – though he’s not short for work. He’s recently been picked up to front a Star Wars game show on Disney Plus.

The Obi-Wan Disney Plus series, which doesn’t yet have a release date or even an official title, should begin shooting later this year and, as revealed at D23, the scripts are almost finished.

Catch up on the adventures of Obi-Wan and Jar Jar with the complete Star Wars timeline.