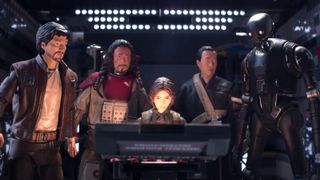 The first chapter of Star Wars: Go Rogue - a slick, stop-motion animation short which brought a ton of hitherto unseen Star Wars toys to life - ended with Jyn Erso making a run for it after acquiring the plans to the Death Star. Chapter two doesn't waste any time picking up where its predecessor left off, and you can watch it below...

This short is even more entertaining than the first, with Erso joining forces with fellow rebels Baze Malbus, Chirrut Îmwe, Captain Cassian Andor, and droid K-2SO to take down a large-sized Imperial. It'll be interesting to see just how much of this is parody and how much is taken from Star Wars: Rogue One's actual plot. In any case, there's some impressive creativity at work here that makes me excited for the final two instalments of the short that will be unveiled later this month.