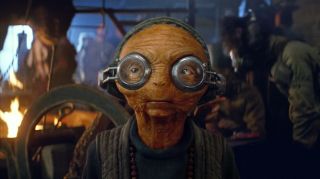 Star Wars 8 may have wrapped production back in July, but even though director Rian Johnson is already hard at work editing the film there is still more footage that needs to be shot. Specifically, Lupita Nyong'o - whose wise Maz Kanata is an all-CGI character - has yet to film any of her scenes for the highly anticipated sequel:

"I haven’t worked with him [Rian Johnson] yet", she revealed to Collider at the Toronto Film Festival. "I’ve yet to shoot. That’s in my future".

While on the one hand this news isn't all that surprising - much of the work on Kanata's character is completed in post-producton - it's a little odd that Nyong'o never set foot on set, given that she was present for her scenes with Harrison Ford and John Boyega in The Force Awakens. Maybe she won't be interacting with many characters this time round?

Of course, Episode 8 is not the only upcoming high-profile film Nyong'o is set to star in. The actress also has a big role in Black Panther, and she's just as excited to start filming it as we are to see it: "I am so excited. I can’t wait to kick ass and learn all sorts of cool things that my body can do. I’m so looking forward to it, to work with Ryan Coogler who’s such an incredible human being. It’s gonna be fun, and the cast. The cast!"

Directed by Ryan Coogler and starring Chadwick Boseman, Black Panther is released in UK cinemas on February 9, 2018 before opening in US theatres on February 16, 2018.