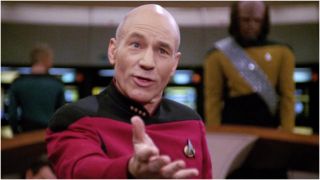 It’s become tradition that Star Trek shows are named after spaceships. Since The Next Generation, a run of Deep Space Nine*, Voyager, Enterprise and Discovery has made sure that the vessels have taken top billing ahead of the crew – but that’s about to change with the arrival of Star Trek: Picard, whose first trailer debuted at San Diego Comic-Con.

It’s a measure of Captain Jean-Luc Picard’s standing that the latest series from Trek’s reborn TV franchise should bear his name. It doesn’t feel at all inappropriate, because in the 32 years since he made his debut on the bridge of the USS Enterprise-D, Picard’s become the definitive commanding officer in the United Federation of Planets fleet.

Even though Star Trek: Picard will visit strange new worlds and be set in a previously unexplored period in the Trek timeline (a couple of decades after the Next Generation crew’s disappointing final mission in Star Trek: Nemesis), Picard’s status is so legendary that there’s no doubt he’s a bigger deal than any ship, planet or event.

While James Tiberius Kirk got there first (or, technically second, if you count the original Star Trek pilot’s Christopher Pike), Picard set the standard for what boldly going is all about – and anyone who follows is destined to be compared to him. From the beginning, it was obvious Jean-Luc was as radical a departure from Kirk as he could possibly be; more outwardly cerebral, not so emotional, and rather less up for a scrap. When the two captains meet in rather contrived circumstances in Star Trek: Generations, it’s clear they’re fundamentally opposed on everything aside from a shared interest in saving the day. The space cowboy and the statesman were never going to be natural BFFs – if anyone from The Next Generation was cut from the same cloth as Jim Kirk, it’s first officer Will Riker, the action man who led most of the Enterprise’s away missions.

But Kirk was never really a product of the future. Although the original Trek is, on paper, a show set in the 23rd century, at its heart it’s about the ’60s. Sure, it has some impressively progressive moments for the time – not least the groundbreaking Kirk/Uhura kiss – but the captain is as much a product of the TV of the era as the Starfleet Academy. He’s the quintessential square-jawed hero, just as comfortable beating up a bad guy or chatting up an alien woman as he is piloting a starship. Lose the uniform and the phaser and Kirk could walk into pretty much any other action show of the time.

Picard, however, is not simply an ’80s guy relocated to a starship. Instead, he’s the figure who most embodies Gene Roddenberry’s idealistic vision for the future – perhaps ironic, considering the late Star Trek creator was not instantly won over by Patrick Stewart in the role.

Jean-Luc Picard is the selfless Starfleet officer who totally buys into the idea of a utopian world, where there’s no need for money, and everyone simply works for the betterment of society. The Enterprise is his life – a glimpse at the family he could have had in Generations shows what he’s sacrificed for his career – and his raison d’etre is making the galaxy a better place. He’s a skilled tactician, a top diplomat, and the perfect manager of any species. Most impressively, perhaps, he’s tolerant of Wesley Crusher. In other words, he’s the kind of person everyone would like to be their boss, because we know he’d get the best out of all of us.

Picard’s relationship with the long-serving Enterprise crew is particularly interesting. There’s clearly respect, affection and friendship there, but also a professional distance that means the captain is perennially lonely – as his tragically unrequited love for Dr Beverly Crusher proves. He could be one of the gang but he chooses not to be – there’s no forced bonhomie, or David Brent-style “chilled out entertainer” vibes – and it’s only in the wonderful series finale “All Good Things” that the actual, genuine (non-duplicate) Picard accepts the crew’s long-standing invitation to join their regular poker night.

Such relentless professionalism could have become boring, but despite being a man whose natural habitat is an office (sorry, ready room) with a fish tank in the corner, Picard’s the most compelling presence in any setting. The sheer quantity of strings on his bow is mind-blowing: he can make squabbling Klingons hang on his every word; he can resist torture, even when he’s not sure whether or not there are “four lights”; he’s the emotional anchor for Spock’s ailing dad, Sarek; and he’s even head-hunted by the Borg, famous for their disdain for the individual, to be the public face of their invasion force. And despite being the source of the famous facepalm meme and numerous catchphrases – “Engage!” ”Make it so!” “Tea, Earl Grey, hot.” – Picard has never, ever been a figure of fun.

Basically, “what would Jean-Luc Picard do?” has become the mantra for every Trek captain who’s sought out new civilisations since. Yes, Deep Space Nine’s Benjamin Sisko and Voyager’s Kathryn Janeway had their own nuances and foibles, but they – and even subsequent commanders who pre-date Picard in Trek canon, such as Enterprise’s Jonathan Archer, and Discovery’s Michael Burnham and Christopher Pike – will always be judged against Picard.

Of course, all this would be for nothing if the man inhabiting the uniform wasn’t such an all-round acting powerhouse. But in a show that’s theoretically built around an ensemble, Patrick Stewart was always first among equals, a star who made everyone around him look better.

It’s hard to believe now what a leftfield choice Stewart was back in 1987. This was an English actor in his late-40s, who’d had supporting roles in The Elephant Man and Dune, but was best known for his stage work. He wasn’t even a household name in his native UK. Perhaps most radically for American television in 1987, he was a bald leading man – early auditions where Stewart wore a wig are, fortunately, consigned to history.

Ultimately, Picard made Stewart and Stewart made Picard. The two men are so intertwined it’s impossible to imagine anyone else playing the captain if The Next Generation ever got JJ Abrams’ Star Trek-style reboot – even a quality actor like Tom Hardy felt like a poor imitation as a young Picard clone in Nemesis.

Whether he’s making tachyon pulses sound plausible, piloting a shuttlecraft or temporarily losing his calm to briefly become an unhinged Ahab figure in First Contact, Stewart owns the character. Indeed, even in a show where a lack of serialisation meant character evolution was minimal, Stewart always kept Picard compelling. On the flipside, who knows if Stewart would ever have gone on to star in big movies like X-Men and Logan were it not for his time on the Enterprise bridge?

In this golden age of television, having an actor of Stewart’s calibre reprising the role that made him is incredibly exciting – and as the Borg would say, “resistance is futile”. Picard and Stewart are synonymous; together, they’re unstoppable. With both on board, Star Trek: Picard has the potential to be legendary – Jean-Luc wouldn’t put his name to anything else. Make it so!

Star Trek: Picard will air on CBS All Access in the US and Amazon Prime Video in the UK from early 2020. Who’s your favourite Star Trek captain? Let us know in the comments below.

* Yes, we know Deep Space Nine is technically a space station, but you get the idea.