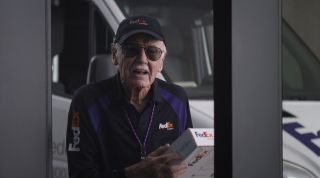 A Marvel Cinematic Universe movie would not be complete without a cameo from Stan Lee, and at a special screening of Captain America: Civil War in LA last weekend (via Collider), Kevin Feige revealed that the Marvel legend has already filmed his appearances in four upcoming movies:

"A couple of months ago in Atlanta, he flew down and we shot four in one day — for four various projects. They’re all awesome! They’re all totally different. And he was unbelievable. He was on fire. He came in, he sat here, he stood there, he stood in this window, and then he went home". Impressive!

For all of Lee's MCU cameos, arguably none of them have come close to eclipsing his appearance in The Amazing Spider-Man (see below), so it will be interesting to see if that changes in any of his upcoming four cameos. Speaking of which, the films in question are probably Doctor Strange, Spider-Man: Homecoming, Guardians of the Galaxy Vol. 2, and Thor: Ragnarok.

Which 'Stan the Man' cameo is your favourite?