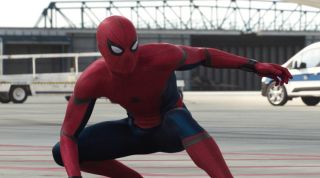 Another day, and another batch of images and videos from the New York set of Spider-Man: Homecoming have landed online. This time round, Tom Holland's hero is dangling off the side of a balcony as only a superhero with Spider-powers can (or a regular human who's attached to wires can. It's one of the two.).

Twitter user abouttomholland got a few shots of Holland in Peter Parker's street clothes too...

As always there's not much we can glean from these videos and photos without context, but by all accounts it looks like Holland is doing much of his own stunt work in the film and that's great to see.