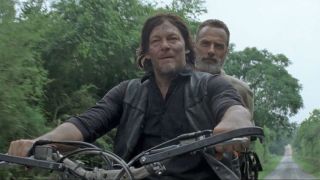 There’s a new villain in town for The Walking Dead season 9 – and she might just make Negan and the Governor look like cuddly bunnies in comparison. That’s right, the oft-rumoured inclusion of the Whisperers has rung true as actress Samantha Morton has been tapped to play the group’s leader Alpha in the upcoming season.

With both The Walking Dead season 8 finale and the Walking Dead trailer from San Diego Comic Con hinting at the inclusion of the Whisperers – a nefarious group from the comics who cover themselves in zombie guts to blend in with the undead population – it’s nice to finally get some confirmation of Samantha Morton’s casting (via TVLine). The actress has previously appeared in Fantastic Beasts and Where to Find Them, as well as Minority Report.

But what do Alpha and the Whisperers (great band name, if you ask me) have in store for Rick and his gang of ex-Alexandrians come season 9? Taking inspiration from the comic book series, as the show often does, would mean that things are going to get very… pointed.

That’s because the Whisperers have a knack of taking the heads of those that oppose them and, uhh, putting them on a stick for everyone to see. Yuck.

In fact, with Andrew Lincoln leaving the show, the whispers (sorry) have already started about Rick being one of the first victims of Alpha. Heck, maybe Negan will find himself propped up on a pole. Either way, the Walking Dead season 9 has, quietly, gotten a whole more exciting – and it’s all thanks to a brand-new villain in the shape of Alpha.

That’s not all to get excited about this year: there’s a whole bunch of new TV shows coming your way.