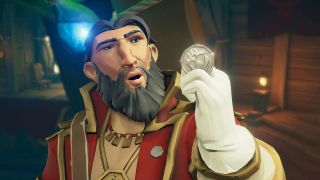 In the latest weekly developer video for Sea of Thieves, Rare teased the next content update: Crews of Rage. Though executive producer Joe Neate said next week’s launch trailer for Crews of Rage will go into more detail, the studio did tease one of the new features to prepare for: Chests of Rage, which are new treasure chests that are as valuable as they are flammable. Yes, really.

Left unattended, these Chests of Rage will begin to overheat and eventually engulf the nearby area in flames. Hint: that includes your ship if you’re stowing it. To prevent spontaneous combustion, players are meant to keep it cool by splashing it with water periodically. Don’t try cheating the system by just sitting it in a shallow pool in your bottom deck either, as that’ll only leave you with superheated water like you’ve taken home a souvenir from The Devil’s Roar.

Introducing Sea of Thieves News! Featuring details about next week's content update, design insights behind the new Chest of Rage and an update on Stitcher Jim's romantic movements from @Captain_Falcore, get ready to be buffeted by a dense wave of information! pic.twitter.com/Dh1ZjEVSbKFebruary 12, 2020

In the game’s “tools, not rules” spirit, players can also speed up the burning process by doing damage to it, turning it into something like a big stick of dynamite. Rare says it’s looking forward to seeing other ways players use this new tool.

Other changes come by way of the Pirate Emporium, the in-game store that uses real money. Players will finally be able to change their pirate’s physical appearances, not just their clothing and accessories. Buying a Pirate Appearance Potion for 149 Ancient Coins, or $1.49, will let players give their plunderers a makeover. Previously, players could select from a randomized assortment of pirates, though patient players could refresh the lineup over and over til they got a swashbuckler they approved of. The process remains the same - you’ll still have to cycle through randomly generated characters - but you’re no longer stuck with the first pirate you ever chose.

A new set of charity sails comes next week too, in the form of the Valiant Dawn sails benefiting St. Jude’s Children's Hospital. Rare proudly revealed just last week that its Noble Pathfinder sails amassed over $76,000 for SpecialEffect.

Looking for more pirates for your crew? Try the new Sea of Thieves Affiliate Alliance.