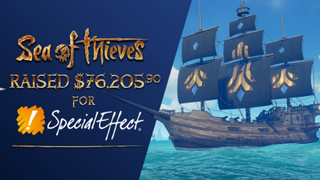 Sea of Thieves players have purchased an in-game charity cosmetic to the sum of more than $76,000, Rare revealed.

The Noble Pathfinder sails were introduced shortly after the Pirate Emporium, Sea of Thieves’ real-money store, was added to the game last year. The store regularly refreshes with new cosmetics for weapons, ships, instruments, and even pets like monkeys and birds. The Noble Pathfinder sails were the earliest of multiple charity sails in Sea of Thieves.

Purchasing the sails directly benefits SpecialEffect, a UK-based charity that helps people with disabilities play video games. SpecialEffect has been around since 2007 and has become a favorite donation destination for charity streamers and others feeling philanthropic in the games industry. The sails sell for 599 Ancient Coins, or about $6. Here’s what SpecialEffect’s founder and CEO Dr. Mick Donegan said on the charity drive:

“I’d just like to say a huge swashbuckling thank you to Rare and the Sea of Thieves community for their incredible support with the sale of the Noble Pathfinder Sails as part of the Festival of Giving. I’m blown away! Your amazing generosity is a huge boost to SpecialEffect and will help my charity to help many more gamers with severe disabilities - not only in the UK but right across the world.”

Rare encouraged players to visit SpecialEffect’s website to learn more, and keep watch at the Pirate Emporium for more charity cosmetics. It’s no small feat to part a pirate’s coin from their pockets unless you’re exchanging a flagon of grog (or two). Well done to the studio, the charity, and the generous pirates at sea.

Did you know Sea of Thieves is also home to its very own urban legend ghost story?