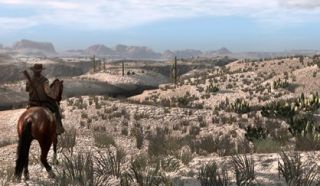 Anyone who’s seen The Good, The Bad, and the Ugly can tell you just how far some people will go for a bit of treasure. That said, we were feeling a bit generous and thought we’d make your own search for gold in Red Dead Redemption a bit easier to manage. Below you’ll find a comprehensive guide that will lead you to hiding point of each of the game’s nine treasures. We’ve got the maps, we’ve got the pictures, the only question is - do you feel lucky punk? Yeah yeah, we know that's Dirty Harry, but Eastwood is Eastwood.

You’ll come across a lot of distressed people over the course of Red Dead Redemption and helping them can be a dangerous prospect. Often they’re just part of a trap meant to draw in do-gooders like yourself. Even when the bystanders are actually in need, the rewards are rarely worthwhile; a few dollars here and there at best.

There is, however, at least one person worth saving if your interest is trapped in monetary gain. At random, alongside almost any large town, you’ll meet a treasure hunter being robbed by bandits. Save him and he’ll give you a treasure map. After this you’ll find a new map with each treasure.

The first map displays pictures of a tree near a collection of boulders. From the tree hangs a noose. This is an easy representation of Hanging Rock.

Head to Hanging Rock and locate the tree with the noose. The treasure can be found in a narrow cranny at the base of the biggest boulder. You’ll find it under a pile of yellow rocks. Every hidden treasure will look similar upon discovery. Finding it will yield the treasure.

The treasure is a bit trickier to find. On the map you’ll find the name “Rio Del Lobo.” Find this place on the map.

Also on the map is drawn a cliff, a rock formation with a gap in it and small campsite. Search the Rio Del Lobo area for the campsite as it is the most obvious landmark.

You’ll find the rocks with the gap nearby. Head through the gap and from there, you’ll need to walk across the cliffside to find the treasure. It’s easier said than done.

The map illustrates a rough path to it, but it isn’t very clear. Just keep trying and eventually you should find a path leading to find the treasure on the cliffside. If you fall down to the beach below – assuming you don’t die - you’ll need to start over and try again. Just remember the treasure is up on the cliff.

If you’ve spent any time exploring the landscape at all, the structure illustrated in the third map should be easy to recognize. It’s the mansion in Tumbleweed near Gaptooth Ridge.

When you arrive at the mansion head around to the west side of the building. You’ll find a cellar door. Head down and walk straight until you reach the wall opposite the door you entered through.

Turn right and you’ll find the treasure on the floor beneath the pictured skull.

You can’t access this treasure until you’ve completed the assault on Fort Mercer. Once you have access to the areas south of the river head north of Chuparosa.

You should encounter a pair of stone walls running near the water. Follow them until you find a tree covered in bull skulls.

From here head straight, back toward the stone walls. On the river side of the second stone wall you should find the treasure.