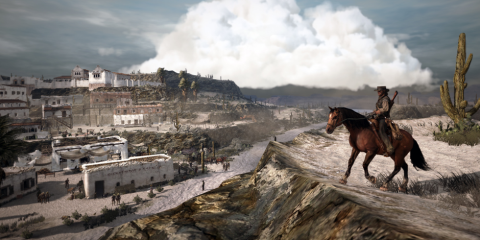 There’s no point having a sprawling landscape if you can't fill it with tons of shit to do in between the regular missions. GTAIV has the occasional stranger to help out in Liberty City. Just Cause 2 has a stack of things to blow up around Panau. And Far Cry 2 has, erm?

Rockstar has not only delivered a kick-ass take on the Wild West era but they've done it with a finesse that satisfies every need of anyone who has ever fantasised about being a cowboy. Unless of course, your visions are based solely on Brokeback Mountain, in which case you may be disappointed. There’s cattle herding, duels, hunting, breaking in horses (not like that) and much, much more to keep you in the saddle for hours.

You play as John Marston - a former outlaw who’s being forced to hunt down his old gang members by shady government officials led by one Edgar Ross. How do you make a bad-ass do wet work for you? Kidnap his wife and kid. So he's fighting for the lives of his family, but let’s get a gripe out of the way early on; while Marston's cause is a worthy one, he doesn’t half go on about it. Every time he meets someone new he bangs on about his plight like a stuck record, which, in terms of story, leaves him fairly one-dimensional.

This might be unfair to say this as most lead characters these days are about as compelling as rock with a face painted on it. But when it comes to Rockstar and their previously soulful leads it’s worth a mention.

It all plays out like GTA except in 1911. You're sent on an initial, straightforward mission to get you used to the controls and how to move around the huge landscape. The story then branches off into separate areas and you'll soon find yourself working with/for various characters - like the Mexican army or simple ranchers - in the search for information regarding the whereabouts of your old chums. Red Dead Redemption takes you through superb little towns and villages that you can buy stuff from, play games in or simply shoot every one up.

Above: Donning a bandana around your face will keep you annonymous

There's a morale system in place for John too; perform good deeds, like preventing a break-in or saving a woman from being kidnapped, and you'll increase your hero status. Take this path and you’ll find cheaper items in stores and the police turning a blind eye to the odd stolen horse. Alternatively, you can take the bad boy route by robbing everyone at gunpoint and holding up shops like a Wild West mad man and get a rep as a feared outlaw.

There are welcome distractions all over the place in Red Dead Redemption. Finish a mission and your end location will often be packed with stuff to do. Talk to a stranger for example and they’ll ask you to do them a favour. In one saloon we were asked to convince a guy’s wife to go back to him. You meet her at the station preparing to leave town and instead of talking things through you can either a) put a gun to her head and force her back or b) hog-tie and return her kicking and screaming. Nice.

There are also Wanted missions to take part in. Treasure hunts, which you'll be given maps and clues to find specific locations. And a wealth of specific games to gamble in.

In it to skin it

If you're not arsed about being caught up in these affairs you can always move between different areas of the map by setting up a campsite out in the wilderness and teleporting from one location to another.

Above: The only way to travel in the Wild West

You can even take a stagecoach, which acts in the same way as the cab in GTAIV, as you can make the driver go faster, slower, or skip to destination. But while this is handy for getting about you’re going to miss out on a whole host of visual treats in Red Dead Redemption.

The siege on Fort Mercer, where you blow the doors off with a dynamite packed cart, assault the fools inside and finally man a cannon to protect your new base is amazing. A real rollercoaster of a mission that typifies the beautiful shooting mechanics of Red Dead Redemption, and puts it above GTAIV in terms of excitement during firefights.

It’s hard to put a finger on a single reason why Red Dead Redemption is so great. It doesn’t do one thing that will make you stand-up and applaud its uniqueness, but the whole package – the environment, the story, which we’re purposely not spoiling here, and the gunplay – all adds up to be a thing of beauty and an early and worthy contender for Game of the Year.

The sturdy FPS take on Western action provided a fairly decent run and gun affair but the story sucked a fat one as you were funnelled down one set-path after another.

GTAIV? No. But only just.

It's highly subjective but personally we prefer pissing about in Banshees around Star Junction than riding a horse about. And the story of Niko is more involving and interesting than John Marston's.

Hi, I’m Nathan. You may remember me from such websites as, erm, this one circa 2011. Been hustling in games for over a decade and write for Official PlayStation, Official Xbox, Gamesmaster and more.
See comments