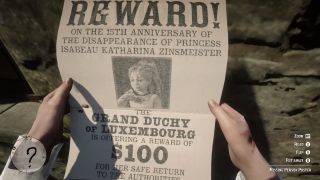 Red Dead Redemption 2 finally launched on PC last week, and with it, a mystery that has been plaguing players ever since Rockstar's western masterpiece landed on the PS4 and Xbox One last year may have been solved at last.

Head to Van Horn in Red Dead Redemption 2's single-player component, and you'll find a Wanted poster for Princess Isabeau Katharina Zinsmeister, who apparently went missing 15 years ago and her father, the Grand Duchy of Luxembourg, is still offering a $100 reward to whoever tracks her down.

Players have been searching high and low across the Red Dead Redemption 2 map for any sign of the missing princess, but to no avail... until last week's PC launch allowed dataminers to delve into the game's backend code.

Surprise, surprise, it turns out this AWOL royal has been sitting under our noses this entire time, though not in the game itself. Instead, an NPC listed as "IKZ" in the game's files reveals the adult version of Isabeau, complete with a birthmark and royal garb.

If you want, you can even import the princess into your own world and role-play as her yourself, though it's nothing quite as deep or immersive as the Red Dead Online Roles you can embody in the game's multiplayer counterpart.

It's assumed that Rockstar had more plans for the missing princess as a full-blown Bounty Hunt quest in Red Dead Redemption 2, but scrapped the mission at the last minute without removing the Wanted poster itself. In any case, check out MrBossFTW's full video above to find out where you can discover IKZ in Rockstar's elaborate game code.

For more, check out these Red Dead Redemption 2 cheats, or watch the video below for our latest episode of Dialogue Options.