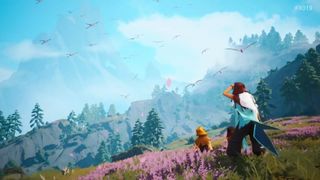 Rare, the fabled British studio behind beloved games like Banjo-Kazooie, GoldenEye 007, and (more recently) Sea of Thieves, has today announced that it's working on a new, Xbox exclusive IP, and it sounds like it's being developed specifically with next year's Xbox Series X console in mind.

The company, which also revealed details of a new free update coming to Sea of Thieves, appeared on the X019 Inside Xbox livestream to speak more about the project, officially titled Everwild.

In an accompanying press release, Rare's Studio Head Craig Duncan described Everwild "as an experience that allows for new ways to play in a natural and magical world", though emphasized that the title was still in its early stages of development.

"The development team, led by Executive Producer Louise O’Connor, is creating something truly original and incredibly special that aims to be more than just a new IP", writes Duncan. "Everwild will give you memorable, engaging and meaningful experiences for players everywhere to share."

Though there was no information of rough release windows or platforms, it's likely the current state of Everwild's development pipeline will mean it'll be releasing exclusively on Microsoft's next-gen console, Xbox Project Scarlett, which is due to release in Holiday 2020.

Everwild will be Rare's second new IP in over a decade, and while Viva Pinata fans might still be holding out hope for a sequel, this news is a comforting reflection of Microsoft's continued support for one of gaming's most cherised talents.