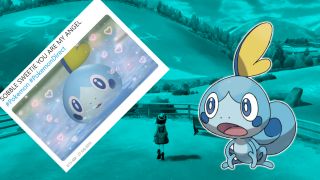 This morning Nintendo dropped some hot news about Pokemon Sword and Pokemon Shield for Nintendo Switch right onto the breakfast table, giving us a look at the new, British inspired Galar region and our three new Gen 8 Pokemon, the Grass Type chimp Pokemon known as Grookey, the Fire Type rabbit Scorbunny and the Water Type lizard Sobble.

The internet reacted as it traditionally does to the new Pokemon Sword and Shield announcement, with jokes and tweets aplenty. Some had their fun with the game's name...

Others were ready to enjoy the delights that Britain has to offer, from high street bakery outlets to Brexit...

So Galar is definitely based on the UK but was really surprised they got their own version of the Cerne Abbas Giant #PokemonDirect pic.twitter.com/YG3XAZUOdvFebruary 27, 2019

heard the news the new pokemon games are set in the UK but wow can't believe it's true pic.twitter.com/9PqHbp4tHVFebruary 27, 2019

But the best part was the outpouring of love for the Water Type lizard Sobble, who has quickly become the mascot for everything pure and good in this world.

Get a sneak peek at the first official Gen 8 Pokemon with our guide on how to get Meltan in Pokemon Go and Pokemon Let's Go.