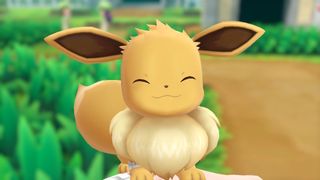 Pokemon Go Eevee is one of the most unique Pokemon, largely thanks to all of its different evolutions and the methods for acquiring them all. There's Jolteon, Vaporeon, and Flareon from Gen 1, Umbreon and Espeon in Gen 2, Glaceon and Leafeon in Gen 4, and Sylveon (not yet available) in Gen 5! This guide details how to get all of the Eevee-lutions in Pokemon Go and the tricks you can use to guarantee which evolution you get. Here's our complete Pokemon Go Eevee guide.

First up is each of the Eevee nicknames you can use in Pokemon Go. There's currently seven Eevee evolutions in the game and in order to guarantee that you'll get one of them, you can use a nickname. Simply rename your Eevee to the following names in order to secure the evolution when you use 25 candy:

When you've used each nickname once however, you can't use it again. So how do you guarantee which Eevee evolution you'll get after this?

How to get Vaporeon, Jolteon, and Flareon in Pokemon Go

For the original three Eeveelutions - Vaporeon, Jolteon, and Flareon - it's bad news I'm afraid. There's no way of guaranteeing any of these three, which means you have to keep catching Eevees and evolving them with 25 candy until you get the one you want. Thankfully, Eevee isn't a particularly rare Pokemon so you should be able to do this without too many problems if you're a frequent player.

How to get Espeon and Umbreon in Pokemon Go

For the two Gen 2 Eeveelutions - Espeon and Umbreon - there is a second method you can use after the nickname trick. You simply have to add Eevee as your buddy, so it walks alongside you, and walk for 10km. At this point, when you evolve that specific Eevee, it will turn into Espeon if you do it during the day, or Umbreon during the night. You can tell what the game thinks it is by the colour of the sky in-game, rather than in real life.

Leafeon and Glaceon are the latest additions to the game with Gen 4, and they're obtained with two brand new items. If you've exhausted the two nicknames, you can get more by heading to a Pokestop and applying a Mossy Lure for Leafeon, or a Glacial Lure for Glaceon. These can be purchased from the in-game store for 200 coins each, and they work like normal lures, except they attract Pokemon of specific types and allow you to evolve Eevee into Leafeon and Glaceon. You can make sure it's working correctly by checking the silhouette of the evolution on the button has changed to the one you're after.

How to get Sylveon in Pokemon Go

Sylveon is the eighth and final Eevee evolution and should be added during the Gen 5 roll out, which has already started with Pokemon like Patrat and Klink. As soon as Sylveon is added to Pokemon Go we'll update this with the methods for obtaining it!