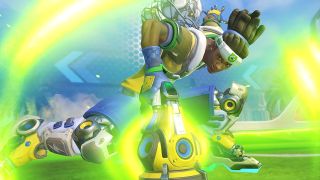 Summer is a time for going outdoors, soaking in the sun, and playing rounds of Lucioball till the early hours of the morning in desperate bids for more loot boxes. If that last activity sounds unfamiliar, you clearly haven't been keeping up with Overwatch, as Blizzard has been running limited time Summer events every year since the hero shooter first released in 2016.

2018 will be no different, either, as the Overwatch Summer Games returns, with more Legendary skins, game modes, and other Olympic-themed items to collect while the event lasts for the next few weeks, starting from tomorrow. Here's everything you need to know before you jump back in for more of Overwatch's endlessly arresting PvP skirmishes.

When do the Overwatch Summer Games 2018 begin?

The Overwatch Summer Games 2018 will begin on August 9, around 6PM BST/10AM PST, at which point an update will be rolled out, and you'll need to download and install it on your platform of choice (PC, PS4, or Xbox One) before playing.

The games will then continue until August 30, though it's unclear exactly when Blizzard will bring the event to a close during that final day. This gives you three weeks to rack up as many loot boxes as you can before the games wrap up, just in time for season 12 of the Overwatch's Competitive mode.

What new skins are in the Overwatch Summer Games 2018?

Blizzard, ever true to its tight-lipped form, hasn't revealed all of the skins, emotes, highlight intros, sprays, or victory poses that'll be available to buy or unlock (via Summer Games themed loot boxes) during the event, but it has been teasing a couple of the new hero outfits on social media.

At present, we know there'll be at least five new Legendary skins for this year's event, all consistent with the holiday or sportswear that we've seen other heroes donning in previous Summer Games over the last two years. Confirmed skins so far include Waveracer D.Va, Gridironhardt Reinhardt , Catcher Winston, Cabana Ana, and Lacrosse Roadhog, as seen below.

Make a splash with WAVERACER https://t.co/JW0Aei8tV0 (Legendary)! 🌊Join us in Busan for Summer Games, kicking off August 9. pic.twitter.com/0IO0BKZMucAugust 4, 2018

Strike opponents out with CATCHER WINSTON (Legendary)! ⚾Join us in Busan for Summer Games, kicking off August 9. pic.twitter.com/QrlWm6pdzsAugust 5, 2018

Stay cool in the shade with CABANA ANA (Legendary)! 👒 🕶️Join us in Busan for Summer Games, kicking off August 9. pic.twitter.com/algIOwJUGVAugust 6, 2018

On top of this, all the old Summer Games skins and items from previous events will be re-unlocked, and can be found in Loot Boxes or bought, at a reduced rate, from the store using Overwatch's in-game Credits or real world money.

This will be your only chance to acquire any of the Summer Games items this year, as once it finishes they'll be locked away until 2019's event, so make sure you hop to it if you're eyeing a particular skin, spray, emote, victory pose, or highlight intro.

What else is happening in the Overwatch Summer Games 2018?

Lucioball, the limited mode that's appeared every year since the original Overwatch Summer Games of 2016, returns for 2018, along with a new map set in Busan. As Blizzard's unusual take on football, Lucioball sees two teams of three - all playing as Lucio - attempting to score goals using the hero's mobility-specific powers.

It's never been the most entertaining PvP mode, and you can see why Blizzard hasn't kept it in-game permanently like Chinese New Year's Capture the Flag, but Lucioball's at least an easy way to get those Summer Games loot boxes quickly, as just playing a single match will net you with one, whether you win or lose the game itself.

Speaking of loot boxes, anyone who logs into Overwatch during the Summer Games 2018 will be met with a loot box to open, free of charge, as a thank you from Blizzard for the community's continued support. So log in, play Lucioball, and spend an hour or two in Arcade, and you'll quickly have enough boxes to net you some great new Summer Games gear to wear and show off in-game for ever.

Overwatch is just one of the many shooters on our list of the best FPS games that you can play right now. See which ones made the final cut!