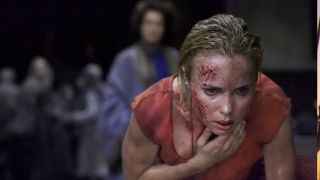 The director of the original Silent Hill movie has confirmed that he's returning to Silent Hill for another film based on Konami's horror series, as well as a new adaptation of the terrifying Fatal Frame (aka Project Zero) franchise, too.

The director of the first – and considerably better received – Silent Hill movie, Christophe Gans, made the announcement via an interview with French-language  site Allocine (via Rely on Horror).

"I have two horror film projects with Victor Hadida," Gans said, with whom he partnered for the original movie, too. "I am working on the adaptation of the video game Project Zero. The film will take place in Japan. I certainly don't want to uproot the game from its Japanese haunted house setting.

"And we're also working on a new Silent Hill. The project will always be anchored in this atmosphere of a small American town, ravaged by Puritanism. I think it's time to make a new one."

From the "puritanism" reference, it certainly seems as though this third instalment will continue the story of the town's tyrannical cult. When asked what memories he took from directing the original film, he said they were "beautiful", particularly has he "had no problems during the production" and was able to "make the film [he] wanted" to make.

"When it hit theatres, it came first at the box office and I felt a great sense of satisfaction. It must be said that there are few French directors who have been able to get this," Gans added.

Given the public and critical response to Silent Hill Revelation – which Gans describes as "brutal" – the director said he had "no regrets" about not being involved in the sequel, even though he turned down the opportunity to work on it.

Perhaps unsurprisingly we don't have a lot of details at this stage, but there has already been early confirmation that the writer of the original movie, Roger Avery, will not be involved in the production.

As for the Project Zero movie? In a bid to avoid "uproot[ing] the game from its Japanese haunted house setting", Gans reports it will be filmed in its native Japan.

Konami isn't ready to confirm or deny the existence of current Silent Hill projects behind the scenes, but it does still have the series in mind. In a statement last week, a Konami representative said that the company "cannot share anything at this point, but we are listening to customer feedback and considering ways to provide the next title".

As the GR+ team discussed last week, that official comment takes us from years of Silent Hill silence to a more optimistic "maybe it will happen?" That's definitely worth something, especially in light of the rumours that not one but two Silent Hill games are currently in development.

While we wait to find out if a new Silent Hill is on the cards, GamesRadar+ is currently tracking the 20 biggest games that will define 2020. For more, click through to our Big in 2020 coverage hub.

Vikki Blake
Part of GR+'s news crew, Vikki is a (jumpy) survival horror survivalist with a penchant for sci-fi, shooters, thrillers, and a strong cup of Yorkshire tea. A committed Guardian and Spartan, she's terrible at FPSs, but loves 'em all the same.
Gaming deals, prizes and latest news