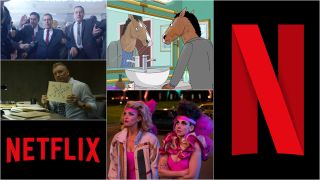 Welcome to GamesRadar's picks for the best new Netflix movies and shows you can watch right now! Every week, our team goes through what's new on Netflix and picks the very best to feature on this updating list.

From serial killer dramas to fantasy epics, these are the best new Netflix movies and shows to watch right now. Now, let's get streaming!

The second season of Netflix’s original series shakes things up by bringing in MCU star Anthony Mackie as Takeshi Kovacs, replacing Joel Kinnaman in the lead role. Post-resleeving, Kovacs is back on Harlan’s World and ready to find his ex-lover, Quell. Expect a moody, spectacular slice of sci-fi as more layers of the future get stripped back for the ex-Envoy.

Relive your childhood with this spectacular re-imagining of Pokemon: The First Movie, complete with updated CGI visuals, incredible battles, and that Ash scene still intact, and ready to break your heart again two decades later.

Season 5 is airing weekly every Tuesday on Netflix – and it gives those in the UK a chance to compare Breaking Bad and Better Call Saul side-by-side. Which is best? One delivers pulsating action while the other, Better Call Saul, continually produces quieter character studies with a dash of explosive entertainment. By this season’s end, we might finally have a definitive answer.

There are few cult movies as beloved as Starship Troopers – and for good reason. This science-fiction flick not only perfectly satirises the military but makes for a wonderfully '90s look at the future; a future, admittedly, where mankind wages war on an alien species of huge bugs.

The Narcos saga continues with Narcos: Mexico season 2. Diego Luna returns as the real-life founder of the Guadalajara Cartel, Miguel Ángel Félix Gallardo, who's still on the run from the DEA and is now seeking power in New York. Pablo Escobar is now but a faint memory for Narcos fans.

It's only fitting that Netflix would release To All the Boys: P.S. I Still Love You just a few days before Valentine's Day. This mushy love story is certainly one for all the couple out there looking to Netflix and chill, rather than spend a fortune on a set meal in some god-awful restaurant packed with PDA.

Netflix's next big comic book adaptation is Locke and Key. The source material, written by Joe Hill and illustrated by Gabriel Rodriguez, features more visceral, bloody, and violent content than the Netflix show – no doubt in order to cater for a more family-friendly audience. But the new show still has heart, and will no doubt be welcomed by anyone looking for a Netflix original series to race through.

Read more: Major difference between the Locke and Key comics and Netflix series

Here at GamesNeighdar—sorry, GamesRadar—we’re always a fan of something that takes a left-turn before Normalsville and just goes and does something we’ve never seen before. Horse Girl, a new Netflix movie starring Alison Brie, takes things to a whole other level. The trailer starts off as a normal rom-com and rapidly turns into a twisting conspiracy complete with horses and alien abductions – and it only gets stranger from there.

Blade Runner's a stone-cold sci-fi classic that everyone with a passing interest in movies should watch. Harrison Ford's mesmerising as the Replicant hunter Rick Deckard, while Rutger Hauer's Replicant on the run, Roy Batty, has one of the best monologues in cinematic history.

For the majority of the world, the Studio Ghibli movies are being made available on Netflix in batches over the next few weeks! These wonderful movies are a true delight. And while a fair few are available now, we've picked our favourite – My Neighbor Totoro – to highlight. If you haven't seen this remarkable animation about a young girl who discovers a delightful spirit animal, then get streaming now.

Are you ready for Bojack Horseman to end? Well, ready or not, the show's finale is here. Will the world's most beloved alcoholic horse get a happy ending? Or will his past misdeeds catch up with him? We can't wait to find out.

All hail the queen. Sabrina's back again, and the latest batch of episodes see the witch heading to Hell to save her partner, Nick Scratch. If you're yet to give Chilling Adventures of Sabrina a watch, then now's the opportune moment as season 3 has received rave reviews – the best yet for the Greendale-set show.

Being a teenager's hard enough – let alone when your mother's a sex therapist. Sex Education was a surprisingly refreshing hit for Netflix, and the second season is as thoughtful, honest, and awkward as the first. Asa Butterfield's Otis and Emma Mackey's Maeve are both back, so expect more will they/won't they drama at Moordale Secondary School.

Joaquin Phoenix has been picking up awards chatter for Joker, yet arguably the actor's best performance remains playing Freddie Quell in The Master. Directed by Paul Thomas Anderson, the movie centres on Phoenix's traumatised Second World War veteran who gets indoctrinated into a cult, let by Phillip C. Hoffman's charismatic Lancaster Dodd. The Master caused controversy thanks to its obvious parallels to Scientology – nad if you're a Phoenix fan then seek this out.

One of the greatest cult movies of all time, The Evil Dead is an almost perfect B-movie horror. Written and directed by Sam Raimi, the first instalment in the series is a bonafide classic that launched a series still beloved by cinephiles and shot both Raimi and actor Bruce Campbell's into stardom.

The Lord of the Rings: The Return of the King (January 1st)

Amazon may have The Lord of the Rings TV series coming to their streaming service, but Netflix still has Peter Jackson's iconic movies. While, ideally, you should watch the Extended Editions, sometimes you just don't have time (each movie runs for around four hours) and the theatrical versions on Netflix are still wonderful, rounded masterpieces that deserve to be watched time and time again.

Matt Damon plays the talented, and baby-faced, Tom Ripley in Anthony Minghella's excellent adaptation of Patricia Highsmith's 1955 novel. However, the real highlight of the movie is Jude Law, who was nominated for an Oscar for his portrayal of the jealous, charming Dickie Greenleaf.

Quentin Tarantino borrows liberally from the martial arts movies of the past in Kill Bill, a revenge thriller in which Uma Thurman's The Bride wants to – aptly enough – kill the horrible, murderous bill. Both volumes are new on Netflix, and both are worth checking out before watching Tarantino's Oscar-contender Once Upon a Time in Hollywood.

Christopher Nolan returns later this year with Tenet. Yet, almost exactly 10 years ago, the director released his masterpiece: Inception. The movie, which has become synonymous with any discussion about dreams within dreams, took the box-office by storm, and won over our team so much that we named it the best movie of the 2010s.

Produced by the BBC, Dracula – created by Sherlock showrunners Mark Gatiss and Steven Moffat – is an updated retelling of the iconic Dracula story. Claes Bang plays the eponymous, terrifying bloodsucker in this familiar yet fresh story of the world's most famous vampire.