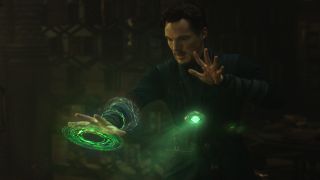 One way Marvel Studios plans to combat superhero fatigue is by introducing a figure from the comics who's nothing at all like the characters currently headlining the Marvel Cinematic Universe. They don't call Doctor Strange the sorcerer supreme for nothing, you know. The corner of the MCU he inhabits is unique because it's chock full of magic, and I don't just mean the magic of cinema, but hallucinatory, cosmic stuff that'll make you wonder what was in that burrito you had for lunch.

Even its director Scott Derrickson says this is the movie where Marvel goes "full weird," and this newest batch of images further that sentiment tenfold.

Apart from the insane reality-bending visuals, like a super trippy Inception, what intrigues me most about this gallery are the looks of determination on Benedict Cumberbatch's face. I don't expect using instruments like the Eye of Agamotto is simple enough that anyone can do it, so these images go some way to demonstrating the effort Strange puts into overcoming his tragic backstory. He looks focused as hell.

Mind you, so does Mads Mikkelsen's villain Kaecilius whose intense glare draws a lot of attention to that stamp on his forehead. What is it? Why is it? And more importantly - who gave it to him? Answers on a postcard.