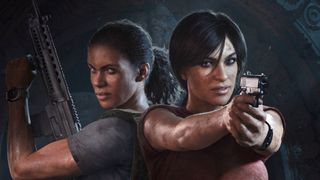 Uncharted 4: A Thief's End gave the world a conclusion to the tale of Nathan Drake, fortune hunter and all-around handsome guy. Uncharted: The Lost Legacy is standalone DLC that focuses on Drake's former flame, Chloe Frazer. So does this mean we could see more adventures focusing on other characters from the Uncharted world? Probably not, says Naughty Dog.

"I would say that Naughty Dog doing an Uncharted after this is unlikely," company co-president Evan Wells recently told Game Informer. "I would never say never, but we've got The Last of Us Part 2 on our plates and there's so much other stuff that [we want to explore]. It'd be hard. If we magically had that two-team, three-team studio, sure – it'd be great to keep doing it. We really love the franchise, but the studio has limited resources and lots of other ideas. I'd say the likelihood is low."

Personally, I feel like I'm ready to move on from Uncharted. I love the series and the characters, but there is such a concept as too much of a good thing. But what about you? Would you prefer more Drake-less Uncharted games and DLC from Naughty Dog, or are you content with The Lost Legacy being your final adventure?