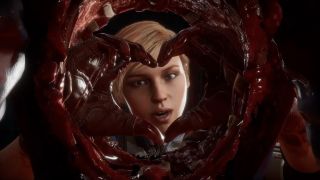 Warner Bros. and NetherRealm Studios have announced a holiday-themed event for Mortal Kombat 11, because what better way to celebrate the most wonderful time of year than by ripping a hole through a man and shoving a shotgun through said hole?

There are actually two separate event periods coming to Mortal Kombat 11, both for the Towers of Time mode. The first, called 'Winter Wonderland,' runs from Sunday, December 22 to Friday, December 27. That one will feature "three Towers with holiday-themed modifiers in the form of falling Killer Kanes, Sledding Tarkatans, Parachuting Ginger Deadmen, Exploding Snowmen, Christmas Trees, Menorahs, Dreidels and Shooting Stars."

The 'Ring in the New Year' Tower event runs from December 28 through January 2, featuring "three Towers allowing players to usher in the new decade with party-themed modifiers, including a Disco Ball, Champagne Bottles, Party Poppers, Fireworks, and a Digital Countdown Clock to ring in the new year."

You don't need to spend a dime to participate in the Mortal Kombat 11's two holiday events, and doing so earns you experience, skins, player module pieces, and consumables. Seems like a win-win and the bloodiest possible way to celebrate the holidays and ring in the new year.

NetherRealm is also working toward bringing crossplay to Mortal Kombat 11, with testing currently underway for Xbox One and PS4. No word on whether the Switch and PC versions will be included just yet.

Mortal Kombat 11 more than earned its spot in our ranking of the best games of 2019.