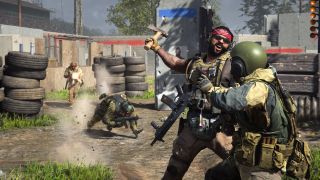 Update: It looks like the menu screen for the new Call of Duty: Modern Warfare battle royale mode may have leaked early, and it includes the same Warzone name shown on the key art leak.

Original story: A new screenshot that’s claimed to be the key art for Modern Warfare’s potential battle royale mode has emerged. It includes the name Warzone and what appears to be Ghost standing on top of a destroyed helicopter.

With Modern Warfare’s season 2 releasing yesterday, we were given an abundance of new content from new firepower to old school maps. However, the one thing on everybody’s mind since season 2 launched, has been the highly anticipated battle royale mode, and whether or not we’re actually getting one.

With plenty of leaks, teasers and rumours floating around, the likelihood of a battle royale mode seems high, especially when considering the greyed out ‘Classified’ tab in the updated Modern Warfare menu screen.

The latest addition in the leaks, teasers, and rumours department is what appears to be the key art for Call of Duty: Warzone, found by a Redditor. Although the post has recently been deleted, it had already gained plenty of attention on Reddit before being taken down.

While we can’t confirm the authenticity of the picture, a battle royale mode is almost certainly on the cards, as season 2 offered a brand new in-game cinematic that showcases what appears to be the map and mechanics of a battle royale.