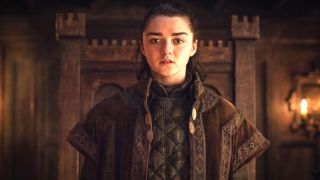 UPDATE: Maisie Williams recently took to Twitter to shoot down the story about the Game of Thrones release date many outlets had run:

Just a tweet letting you know this game of thrones release date "quote" I've supposedly given is completely false and taken from an interview I did years ago.January 30, 2018

ORIGINAL: Just another winter to get through then. Game of Thrones season 8 is out in 2019, we already knew that. What we didn’t know was exactly when we’d be seeing the final six episodes of Westeros’ finest warriors and White Walkers. You can thank Maisie Williams, however. She’s probably said a bit too much on the subject…

If Arya Stark dies in the very first scene of Game of Thrones season 8 then this Metro interview might have something to do with it. In it, Williams says, “We wrap in December and we air our first episode in April [2019]. That’s a four-month turnaround for these huge episodes.”

So no midsummer madness for Thrones this time around. In fact, Game of Thrones season 7 aside, the show has history when it comes to debuting in April. Every season except seasons 7 and 3 (which debuted on March 31) has begun in April. So, with all being well (and correct), you can expect the Game of Thrones season finale to air sometime in late May or early June.

Williams, whose tongue is probably a bit too loose for HBO’s liking, was also keen to laud the incredible work put into making the final season a reality: “There’s a lot that goes into the final edit. You would not want to rush this season at all. We owe it to our audience and our fans to really do this final season to the best of our abilities.”

So, mark your calendars. April 2019 is (probably) the beginning of the end for Game of Thrones.

For more Game of Thrones goodness to tide you over, check out the story behind one of the show's biggest and best battles, as well as Maisie Williams (again!) on how she thinks people will react to the final Thrones season.