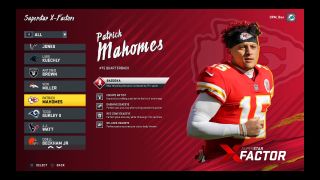 Good news for anyone who believes Patrick Mahomes to be the best QB in real-life football: Madden 20 ratings say he's the greatest on the digital turf, too. Despite injury the Kansas City signal-caller looks set for another run at the play-offs come January, although no one should write off his closest Madden 20 challenger: a certain Tom Brady. Wondering who else shapes up well in this year's game? Below you'll find the top five players at every position, according to the default on-disc Madden 20 ratings.

Has your favourite missed out on the list? Then instead use the official Madden 20 ratings database to see how they fare this year.

Receiver is an absurdly stacked position in Madden 20, with 13 players rated 90 or above. Particularly exciting from a videogame perspective is two of the top five stepping out with new clubs: start a franchise with the Raiders or Browns to enjoy Brown or Beckham in fresh jerseys. The Vikings should also prove tempting. They have two glue-handed widemen in that 90+ club, in Adam Thielen (94) and Stefon Diggs (93) – but can digital Kirk Cousins (81) get them the ball?

There’s only one truly elite option at tight end in Madden 20, although he’s a fairly special one: Travis Kelce boasts ratings of 99 for awareness, 93 for catching, and 88 acceleration, among other strengths. Last year’s numero uno, Rob Gronkowski, has retired, while Jordan Reed (Washington, 88) also slips out of the top five. He’s sandwiched in seventh by Tyler Eifert (Cincinnati, 88), Trey Burton (Chicago, 87) and Jared Cook (New Orleans, 87).

Left tackle is considered the most important position on the defensive line – what do you mean you’ve never seen The Blind Side?! – so fair play to Mitchell Schwartz for cracking this list despite playing on the right. Bakhtiari tops the list for the second year in a row, but Philly pair Lane Johnson (89) and Jason Peters (87), who both nabbed top-five slots last year, are demoted to 7th and 10th respectively.

Madden 20 proves to be quite the year for the Kelce family: older sibling Travis topped the tight-end charts, and here’s little bro Jason sitting equal-second in the interior lineman countdown. No, Dolphins fans: sadly there isn’t a younger sister who can step in at quarterback. Note the paucity of left guards on the list: the best three are Ali Marpet (Tampa Bay, 88), Joel Bitonio (Cleveland, 87) and Quenton Nelson (Indianapolis, 87).

Aaron Donald keeps JJ Watt off the mountaintop for the second year running, not that such news will phase Texans fans: their talisman still scores ratings of 99 awareness, 97 strength, 94 power moves and 97 tackling. Next men up in the top ten are Geno Atkins (DT, Cincinnati, 91), Myles Garrett (RE, Cleveland, 91), Cameron Jordan (LE, New Orleans, 91) and Kenny Clark (DT, Green Bay, 90).

It speaks volumes for New England’s ‘team-first’ approach that Gilmore is only the second Patriots player to appear on these top-five lists – despite them winning last season’s Super Bowl. (Unsurprisingly, the other is Tom Brady.) Gilmore can’t overhaul Jalen Ramsey from top spot, but those two and Sherman spearhead a strong CB class that also includes Patrick Peterson (Arizona, 92), Byron Jones (Dallas, 91) and Chris Harris Jr (Denver, 90).

Madden 20 is out now. Need to know how best to utilise all these elite stars? Then enjoy these Madden 20 tips: 7 key things to know before you play.