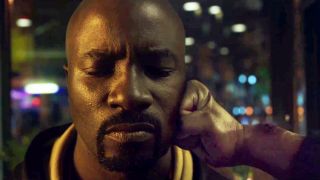 The footage we've seen for Luke Cage thus far has done a good job of teasing how fights between thugs and a bulletproof, super-strong black guy in Harlem play out (hint - it doesn't end well for the bad guys). The latest clip for the upcoming Marvel show - which finally arrives on Netflix later this month - adds a bit more context, ass-kicking, and quips to a scene that's only been previously glimpsed at in trailers, and it makes the wait for Cage's solo series that much harder.

While Daredevil and Iron Fist are experts in martial arts, Jessica Jones and Cage are superpowered brawlers. The contrast in fight styles will be particularly interesting to see once the four heroes are fighting alongside one another in The Defenders. For now though, watching Cage calmly and coolly dole out justice is plenty satisfying.