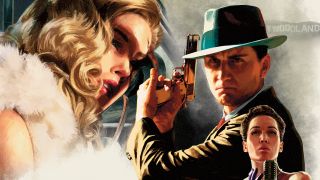 If you were hoping this news was about a sequel to L.A. Noire you’re going to be disappointed. It’s not happening. However, Rockstar is bringing back its detective drama in a big way with three brand new versions, all arriving November 14.

For a start, L.A. Noire is coming to the Nintendo Switch, which actually marks the first time Rockstar has launched a game on a Nintendo console since Table Tennis… in 2006. The Switch version is the complete original game and all its DLC content. But there are some Switch specific features including touch screen controls for when you’re playing on the go. It’s even getting some special gesture-based controls for the Joy-Cons, which we hope lets you get seriously involved with questioning during interrogations.

The VR version, on the other hand, is exclusively for the HTC Vive and lets you play through seven of the L.A. Noire cases that have been specifically rebuilt for virtual reality. Rockstar is calling it an “unprecedented interactive experience”, so we’re very intrigued to see how the game’s great storytelling translates to VR.

The third iteration of this L.A. Noire revival is for PS4 and Xbox One. It’s the original game and all its DLC but in full 1080p HD on Xbox One and PS4, and 4K on PS4 Pro and Xbox One X. According to Rockstar, you can expect “a range of technical enhancements for great visual fidelity and authenticity, including enhanced lighting and clouds, new cinematic camera angles” and more.

It’s basically the same thing Rockstar did for the PS4 and Xbox One versions of GTA 5, but with extra shiny, shiny for Xbox One X and PS4 Pro.

Hopefully working on bringing the game to these new platforms sparks an interest to make a sequel, even if the original developer Team Bondi isn’t around anymore.