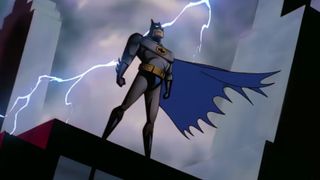 For many growing up, he was vengeance, he was the night, and he most definitely was Batman. Kevin Conroy, though, has been lined up for a very different take on his most iconic role: he’s playing an older Batman Beyond-style Bruce Wayne in the upcoming Arrow-verse mega-crossover, Crisis on Infinite Earths.

As revealed at the Television Critics’ Association 2019 event (via Fandom’s Eric Goldman), Crisis on Infinite Earths – which brings together most of DC’s live-action output, including Arrow, The Flash, and Supergirl – will mark the first time Kevin Conroy has stepped into the real-life shoes of Bruce Wayne.

The Crisis on Infinite Earths crossover will include characters from #BlackLightning - and @RealKevinConroy will be in it as an older Bruce Wayne!!! #Arrow #TheFlash #Supergirl #LegendsofTomorrow #Batwoman #TCA19August 4, 2019

Many will undoubtedly instantly recognise Conroy’s voice, if not his face, from his turn as Batman in the ‘90s animated series. Conroy has also continued voicing the Dark Knight across several projects, including the Rocksteady Arkham games, and animated movies, over the past 25 years.

Nothing is yet known about Conroy’s role, other than it being an “older Bruce Wayne,” possibly in the mentor role that featured so heavily in animated series Batman Beyond. But Crisis on Infinite Earths is sure to be a must-see event for those who have spent years watching DC’s costumed heroes on the CW Network. The already-set superhero line-up, featuring Stephen Amell in one of his final appearances as Oliver Queen/Green Arrow, won’t be battling the Anti-Monitor across the multi-universe spectrum alone.

That’s because, as well as Conroy pulling on the cape and cowl for a superpowered return, Burt Ward is returning, possibly as Robin, having last played the Boy Wonder way back in 1960, and Brandon Routh, who was Superman in the 2006 movie Superman Returns, is also back to play the Son of Krypton.

No matter your era, be it the cheesy 1960s fare, the dark and dreary noir stylings of the 1990s, all the way up to the present day, there’s a very good chance one of your favourite superheroes will be showing up. It’s TV’s version of Avengers: Endgame and, as the Conroy casting proves, it’s pulling out all the stops for fan service in a big way.