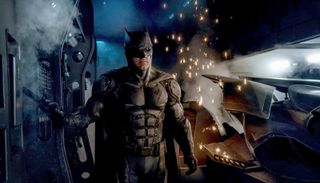 One of the many tidbits we learned about next year's Justice League movie a few months back is that Ben Affleck's Batman has got A LOT of new hardware, ranging from vehicles like the Flying Fox - which will be a mobile Headquarters for our team of heroes - and new Batsuits.

Zack Snyder took to his Twitter account to give us a sneak peek at the latter, sharing an image of Batfleck in his "new tactical Batsuit" as filming on the movie nears completion.

At first glance this version of the Batsuit is much darker than Batman's traditional gear, and its features include added protection in the form of armour plating and a fancy pair of built-in goggles. I wouldn't be surprised if Bruce has more tricks up his sleeve too, but those reveals will presumably be saved for the film itself.