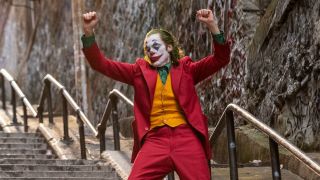 Joker, meet Joker. Joaquin Phoenix’s version of the Clown Prince of Crime may be a world away from guffaws and grins of Jack Nicholson’s take on the character back in Tim Burton’s Batman. But an obscure Easter egg has tied the two together – and it’s so well-hidden that it’s taken fans until now to discover it.

Noticed any of the art on the wall of Arthur Fleck’s mother’s apartment? One, in particular, might stand out – a child decked out in blue regalia. It’s a replica of The Blue Boy, an 18th Century oil painting by Thomas Gainsborough. It’s not just there to make the room look pretty. It’s actually a wonderful nod to a scene from 1989’s Batman.

The moment in question involves Nicholson’s Joker waltzing into a museum, flanked by henchman. The Blue Boy is just one of several paintings that are vandalised, with Joker taking a brief look at it before it gets spray-painted. Take a look for yourself.

Coincidence? We hope not. It’s a neat way to shout out the big screen originator of The Man Who Laughs while adding to the pile of Joker Easter eggs that reference the franchise's history, including shoutouts to the ‘90s animated series and even the Adam West Bat-Pole.

Props – pun absolutely intended – to whoever had the forethought to feature that in a scene. It also goes to show the throughline that the two versions of the supervillains had in common: they’ve both got moves.

Now, we really really want to see Joaquin Phoenix’s Joker do his own version of the museum scene, complete with a boombox. Make it happen, Warner Bros.

Phoenix? Nicholson? Ledger? Find out who comes out on top in our ranking of the best Jokers.