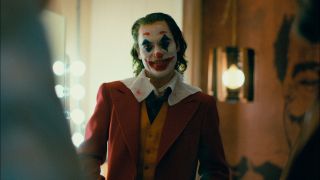 Joaquin Phoenix has won the Oscar for Best Actor for his performance in Joker, beating fellow nominees Antonio Banderas (Pain & Glory), Leonardo DiCaprio (Once Upon a Time in Hollywood), Adam Driver (Marriage Story), and Jonathan Price (The Two Popes). Phoenix was the favourite to win the award, but the actor was clearly moved during his speech.

Accepting the award, Phoenix took the opportunity to speak out against inequality, whether it be gender, race, or animal (the actor is an outspoken vegan). He referenced the farming industry's practice of artificially inseminating cows to then use their milk for commercial purposes.

"When we use love and compassion as our guiding principals, we can create systems of change," Phoenix said. "Not when we cancel each other out for past mistakes, but when we guide each other to grow, for redemption, that is the best of humanity.”

His speech was reminiscent of his BAFTA speech, in which he called out Hollywood's "systemic racism" and implored his fellow actors to do better to increase diversity on set and in the business in general.

He ended his speech with a lyric written by his late brother, River, who passed away in 1993: "Run to the rescue with love and peace will follow."