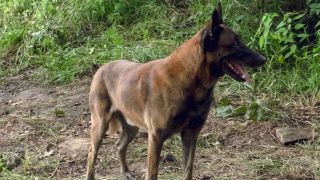 UPDATE: The Walking Dead has made an official response to the petition to not kill Daryl's dog, and it's... not encouraging. But hey, if AMC always listened to popular demand before it killed off central characters, nobody would die! Well, except maybe Lori.

Original story: “Please don’t kill Dog!” Of all the petitions that I expected to go up about The Walking Dead season 9, a 50,000-backed campaign to save Daryl Dixon’s mangy mutt, Dog (yes, that’s its name) wasn’t one of them. Still, here we are. And fans have got the chance to prove their bark is worse than their bite as the petition is oh-so-close to reaching its goal. Can you tip it over the edge?

The petition, which launched last week (H/T ComicBook.com), waxes lyrical about a “doggo joining the cast” and that “the idea of an innocent and helpless animal like a dog getting hurt is truly soul crushing.” No arguments from me. We can’t have that canine perishing so soon, even on a show as grisly and grim as The Walking Dead.

Remember, this is all because of Daryl’s dog first appearing post-time jump in The Walking Dead season 9, episode 7 and stealing our hearts. Of course, this being The Walking Dead, it instantly got itself in mortal danger after being trapped and then the Whisperers reared their ugly heads – or should that be masks?

Now, the milestone has been set: 55,000 signatures and maybe, just maybe, The Walking Dead writers will sit up and take notice. The current total as of writing is 53,240 so there’s not much more to go until the Walking Dead dog petition (I can’t believe I’m typing this) reaches its goal.

You can sign the petition here, and even leave a little message explaining why you want Dog to stay on the show. Although the reasons given – “He seems to be a substitute for Rick Grimes” – do seem a little far-fetched. Maybe Daryl’s best friend needs a cowboy hat first and a little pupper son named Grr-arl?

If Dog doesn't make a cameo appearance in The Walking Dead movies then this will have all been for naught, I'm telling you.