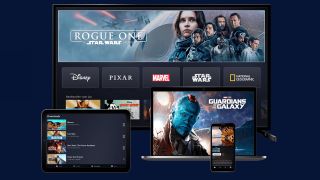 Is Disney Plus on PS4 and Xbox One? It's a fair question to ask. Many of us use our consoles as Blu-ray players and/or in place of Smart TVs, so being able to get the new streaming service on them is a pretty big deal - especially considering how well shows like The Mandalorian have been going down. There are Netflix and Amazon Prime apps for consoles, so it's fair to expect one.

PS4 Black Friday
Want to save cash on a PS4, games, and accessories? Don't miss these hot offers.

So, let's settle this: is Disney Plus on PS4 and Xbox One? Yes. It's easy to get ahold of as well. Once you've organised your Disney Plus sign-up, you simply go to the PlayStation Store or Xbox Store and search for the Disney Plus app. You'll then be able to download and use it just like you would on any other device.

That then leaves you able to make the most of the House of Mouse's best work. And at a high quality, too. Is Disney Plus 4K and HDR ready? Yes, it is. You don't have to pay anything extra to take advantage of Ultra-HD settings, either - it's included as standard. If you have a 4K panel (one of the best gaming TVs, for example) you can then take advantage of this super-sharp resolution at no extra cost. There's always the Disney Plus free trial if you'd prefer to try before you buy, too.

So, onto the next question: how much does Disney Plus cost? Fortunately for our wallets, it's not too expensive in any region - it weighs in at roughly half the cost of a month's Netflix membership. For the US, that's $6.99p/m. If you're based in the USA, there's also a cheap Disney Plus deal that offers cracking value for money, too - you'll get Disney Plus, Hulu, and ESPN+ for just $12.99p/m, a saving of about $5 compared to buying them all separately (and if you already have Hulu or ESPN+, you'll receive a further reduction).

We've laid out all the best deals below.

Cheap Disney Plus deals (US)

Disney Plus | $6.99 per month
This is the normal membership for Disney Plus that has 4K and HDR capabilities. A steal at that price.View Deal

Disney Plus, Hulu, ESPN+ | $12.99 per month
This deal may well be the best value for money if you're into sports, drama, and movies - it's got something for everyone.View Deal

Disney Plus
Other parts of the world still get a good deal; in Canada/Australia it comes in at $8.99p/m, while New Zealand pays $9.99p/m.View Deal