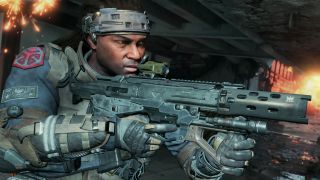 Change can be scary, especially when it comes to core game mechanics that've been in place for over a decade. Regenerating health has been a staple of the Call of Duty series since its second entry, and players have ingrained the 'hide and heal' playstyle into their minds and muscle memory. But Call of Duty WW2 threw its fans for a loop when it removed regenerating health from its single-player campaign - and now Call of Duty: Black Ops 4 is upping the ante even further, removing the familiar auto-healing system from its multiplayer shootouts. Instead, it's now the player's responsibility to to manually mend themselves after a fight via a quick stab of an HP-restoring syringe. And after seeing my fair share of kills and deaths in the Black Ops 4 beta, I never want to go back to the old, stop-drop-and-heal ways of the past.

As with any sweeping systems change, the unfamiliar health system - which includes an honest-to-God health bar in the bottom left, complete with a numerical representation of your wellness - has ruffled many a camo-colored feather in the community. Along with the admittedly overpowered Body Armor perk that anyone can use, some players are critical of how the new method of healing impacts CoD's famously fast time-to-kill (often abbreviated as TTK). But after a weekend spent in the PS4-exclusive beta (and before excitedly jumping into this weekend's beta test that includes Xbox One and PC), I'm convinced that the self-heal is a masterstroke for honing the breakneck pace that CoD has modernized like no other FPS.

In my mind, CoD has come to be the contemporary successor of the old-school arena shooter, with the speed of Quake and a lethality just shy of Unreal Tournament's Instagib mode. So instead of forcing players to always cower behind cover whenever they've been tagged by a hail of gunfire, why not give them more options? Black Ops 4's syringe is a tool that allows you to constantly push forward like well-oiled killing machine - but it doesn't restrict you from falling back on familiar methods.

I'm totally in line with the latter, still stuck in the old ways of diving for a safe hiding spot, tapping L1 to stab myself with a lifeforce-restoring needle, and meekly aiming at the nearest doorway while I wait to heal back to full. But I've seen tons of expert players (mostly via killcams and the end-of-game highlights) rack up some amazing streaks as they wade into war with no fear, skillfully waiting for the right moment to heal up during the middle of a Commando-esque rampage. Charging forward like a bloodthirsty, bullet-spraying rhinoceros has always been a gamble in any Call of Duty, but with the heal-over-time effect of the stims, it now feels more like a calculated risk with huge rewards rather than a suicidal blaze of glory.

It's also important to remember that we live in a post-Overwatch world, where the FPS genre has come to be defined by the actions players have at their disposal besides running and gunning. Call of Duty: Black Ops 3 already put the foundations in place with its unique Specialist heroes, each with their own distinct abilities and ultimate moves. Now Black Ops 4's health system has solidified the feeling that its Specialists have multiple abilities to manage at any given time - stim on L1, Specialist equipment on R1. There's an inherent excitement to seeing that you've got both abilities at the ready should you need them, and a thrilling tension to those last few seconds when you're waiting for your stim shot to replenish before running into the next firefight. Overwatch's ubiquity has trained us to enjoy micromanaging the cooldowns that exist outside our ammo clips - but brilliantly, it doesn't feel so bad to be shot dead before you had the chance to heal up. With the quickness of CoD's respawns, you're instantly back into the fight, eager to tap L1 and heal yourself just a bit quicker next time, or have the courage to push forward mid-heal instead of falling back.

As always, the current designs are always subject to change, and the beta tests exist to help Treyarch hone in on the perfect tuning for all these interwoven game mechanics. But for my money - and yes, it is my money, I ponied up for a pre-order like everyone else - Black Op 4's health system is one of the most refreshing iterations yet to Call of Duty's time-honored multiplayer. Every time I see that little yellow cross at the bottom left of my HUD start glowing, I get excited, with killstreak aspirations made possible by that extra bit of survivability - and a constant source of excitement is surely a good thing for any FPS.

If you're eager to jump into the fight, don't miss our Call of Duty: Black Ops 4 tips that'll help you dominate the beta.