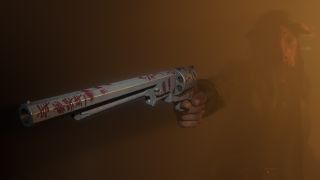 "A vicious serial killer is roaming the countryside, carrying out bloody murders with an antique Navy Revolver. Scour Blaine County for clues and bring this wicked killer to justice to claim their unique weapon for your own collection," reads Rockstar's official mission description.

The Serial Killer Mystery mission was added as part of GTA Online's Diamond Casino Heist update, tasking you with tracking down a serial killer who's been making their way through Blaine County with the Navy Revolver. Track down the elusive murderer and nab the weapon to unlock the Navy Revolver Challenge.

Rockstar gives you clues as to where to find the revolver in Red Dead Online once you've unlocked it, but doesn't outright reveal its location. But if you're not much for treasure hunts, feel free to read on for the location.

According to Reddit, Lowry's Revolver can be found in the cellar of a building southwest of Valentine, south of and in-between the A and L of "Valentine" on the map. Reddit user Quahox was kind enough to mark its location on this map. According to some comments, you might need to save and restart your game for the lockbox to unlock.

Here's our quick start guide to GTA Online for getting rich quick.