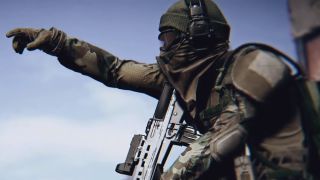 Ghost Recon Wildlands' sequel Ghost Recon Breakpoint is nearly here but the original game still has another surprise for players coming Thursday: one last big title update with an all-new way to play multiplayer. Mercenaries Mode is an 8-player, PvPvE experience that changes several fundamental parts of Wildlands, creating a mix of the usual controlled-chaos with free-for-all battles that are sort of battle royale but also not.

The goal of Mercenaries mode is to be the first (and consequently only) player to board a helicopter and escape the map. The first challenge is figuring out where the helicopter extraction point will be; activate transmitters and you'll get a better idea of where the helicopter's set to arrive, giving you a headstart (or a chance to set up an ambush) on your competition.

Once the helicopter arrives, it will be visible on the map for everybody, but you have to satisfy two conditions to get extracted: A) you must fill up a gauge by remaining nearby (you'll start off with some of it filled if you activated a transmitter), and if you can make that happen, B) you must be the only player in the area to win. So it's a big 8-player hunt that turns into a King of the Hill match at the end. Oh, and you'll have to contend with NPC Unidad soldiers on top of all that.

The battle royale parts really come in with Mercenaries' new loot, armor, and health mechanics. You start off with nothing and gather all your gear on site (look for buildings with breakable doors), and that includes damage-absorbing armor as well as medical items that can heal wounds and/or stop bleeding. You respawn if you die, but you'll lose everything you were carrying at the time, which will make it harder to fight your way to victory at the extraction zone.

Finish your first round of Mercenaries Mode and you'll unlock the Lone Wolf costume, which is what your frenemy Jon Bernthal wears in Operation Oracle. Pull off a win and you'll unlock the Mercenary Patch, and by the time you rack up 25 victories you'll have a whole new Mercenary set of gear to wear. That should help keep you busy until Breakpoint arrives on October 4.

Keep an eye out for any developments over the weekend with our San Diego Comic-Con 2019 schedule.