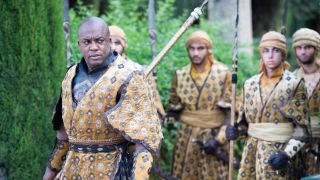 Did you think the Dorne scenes in Game of Thrones season five and six sucked? You know, the ones that start with Jaime Lannister and Bronn the Sellsword putting on some different clothes and sneaking into a forbidden kingdom, and which recently featured a dude with a sweet poleaxe getting shanked before he could even use it?

You're not alone if so, though what separates you from Fixing Dorne Productions is that you probably don't want $20 million to produce and record your own Dorne-alternative scenes. Yes, this is an actual Kickstarter, and here is the pitch:

There's passion here, though a bunch of the Kickstarter is framed weirdly like a joke. Case in point, the $1,000 reward tier is titled "Okay, This Has Gone Far Enough" and the $50 million stretch goal will add new scenes to make Ned Stark live "through at least Season Five". Everyone knows it's physically, spiritually, and contractually impossible for a Sean Bean character to live that long.

I'll take that levity to mean the Kickstarter's creators are plenty serious about their desire to rewrite television history on a groundswell of fan support, they're just being realistic about their chances; a $20 million baseline goal puts them just south of the $20.3 million raised for the most-funded Kickstarter ever, Pebble Time, and that began with just a $500,000 goal. Funding likelihood aside, HBO could pull on the executioner's hood and send a cease and desist notice at any moment.

Still, Fixing Dorne has managed to raise just short of $25,000 as of this writing with 17 days left in the campaign. Stranger things have happened.