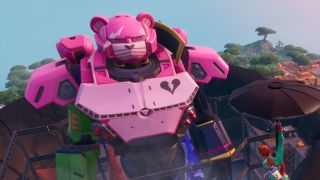 Fortnite season 10 is nearly upon us, and the latest series of Fortnite season 9 leaks and Fortnite patch notes have given us a pretty good idea of what to expect from the big transition, which is set to be marked by a special event officially known as 'The Final Showdown'.

I say officially, because Fortnite fans have been colloquially referring to the event as 'Cattus Doggus', which is set to take place this Saturday, July 20 at 11AM PST/2PM ET/7PM BST, and will supposedly allow players to witness a huge, Pacific Rim style fight between a giant Cat-like beast and a mechanised robot bear.

Developer Epic Games has been building up to this showdown over the course of season 9, as 'Cattus' was first spotted encased in ice, before moving its way around the map and eventually ending up near Loot Lake.

10 games that should go battle royale, from The Binding of Isaac to TimeSplitters

'Doggus', meanwhile, has been gradually taking shape over at Pressure Plant, until the latest Fortnite update has pretty much revealed its final form; a mechanised take on the popular Cuddle Team Leader outfit from the game's early days.

Players who have been collecting their share of Fortnite Fortbytes have also been treated to a special image that teases more about the big Cattus vs Doggus showdown, which will reportedly allow players to spectate from special Sky Platforms in real time, and even show their support for either side via a new banner system.

It's unclear whether community action will be able to affect the outcome of the fight, or if the winning supporters will receive any special prize for backing the right team, but it's likely that Epic will be teasing more info over the next few days in the lead up to the big battle. In any case; just make sure you're in a match at the right time on Saturday, and don't forget to equip that popcorn emote.

For more, why not watch our Release Radar video below, or check out our guide to the best games like Fortnite when those dreaded downtimes hit?