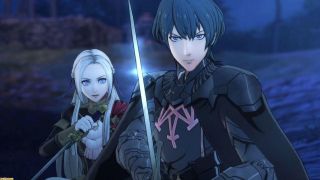 Fire Emblem: Three Houses New Game Plus is a very useful feature for anyone who wants to start another play-through. As you dive into Fire Emblem: Three Houses, the very first choice you make is which house to join. Naturally, this means that eventually you'll probably want to start another play-through to experience each different route you can take, and get to know all of the other characters you didn't meet the first time around. Once you've finished one campaign to completion, the New Game Plus feature will unlock - giving you access to various perks for your new run.

You get to keep some Progress

As you go through the first playthrough you'll unlock unique battalions, gain special skill experience from saint statues in the monastery, and get access to new items in the shop. You can choose to retain all of this in your second playthrough, meaning you'll start off with quite the advantage if you want it.

You're also free to ignore some of these bonuses to retain the challenge from the original run. The real perk here is the ability to skip some of the Persona stuff while still getting the benefits of it. That's not to say the Persona elements of Three Houses aren't fun, they are just time consuming.

Use renown to quickly level up

Renown points are gained through completing missions and other tasks for characters during free time and after battles. They can be used to level up saint-statues hidden in the corner of the monastery. Those statues give you bonus points for all kinds of different skills including bow, lance, axe, and sword usage. There are four different statues that can be levelled up as you play.

Fire Emblem: Three Houses New Game Plus lets you keep the saint-statue level you had in the previous play through. That frees up the renown points you gain in the second playthrough for other purposes. You can use them to upgrade your professor level, skill levels for any of your soldiers, and unlock combat arts and new classes all without stepping foot on the battlefield.

It feels incredibly cheap but makes experimentation with new classes, relationship building with various characters, and a number of other things that would take a lot of time in a regular play through much easier. Once you've unlocked New Game + just head over to your journal in your room to get started.

As anyone who's seen some marketing for Fire Emblem: Three Houses knows, there is a five-year time jump in the middle of the game. Afterwards all student characters will have new portrait art and 3D models that reflect their time at war.

Most characters are more grizzled and grown up. It completely changed how I looked at them. Fire Emblem: Three Houses New Game Plus lets you customize your characters appearance freely. The only additional costumes and hair options that are available at the start are their models from after the time jump. So you can have your squad look at war torn and weathered while walking between classes at the monastery.

More may be unlockable and I'm sure Nintendo and Intelligent Systems will add more post launch.

Renown, which is used to unlock all sorts of goodness in a Fire Emblem: Three Houses New Game Plus run, is earned in small increments by completing missions and winning battles during your first play through. You'll get to earn more during your second playthrough as a "special perk" for completing the game.

Crests are a big element in Fire Emblem: Three Houses story. They are magical essences past down through bloodlines that offer holders special powers. Dimitri, head of the Blue Lion house for example, has a crest that occasionally doubles his attack and weapon uses for Combat Arts.

A New Game+ gives you the option to purchase special Crest Powers with renown points based off your decisions in your first play through. You can then assign them to your team to give each unit a special bonus. Most credits signs cost around 1000 renown points.