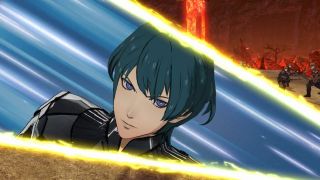 In Fire Emblem: Three Houses, you'll be spending a lot of time improving your characters' skills and working to build up an effective, versatile army of units. Just like other games in the series, Fire Emblem: Three Houses classes are just as varied in design and ability, but this time around the students have to take exams in order to change to a different class.

After leveling up and improving skills, each character will have a percentage chance of successfully passing an exam to change classes, and every class has certain skill requirements. There is no better feeling than seeing a unit you've leveled up over the course of the game become all the more powerful on the battlefield.

With new mechanics like adjutant units, lots of skill sets to choose from, and classes to switch up to, there's a lot to get to grips with. So without further ado, here is a war chest full of Fire Emblem: Three Houses classes tips to help you build the best army around.

1. Be strategic in how you prioritize skills

Skills grow in both the battlefield and the classroom in Three Houses. While you can prioritize a few skills at the same time by both assigning them in the classroom and practicing them on the battlefield (lance skills will increase if you use a lance in battle), you can also split the focus to make sure a unit gets a wider range of abilities.

For example, if you want a character to eventually become a holy knight (a versatile paladin who has high stats all around) then you'll want to have a soldier focus on horse riding and lance usage at first. Then once they have somewhat high levels in those areas, change their study habits to focus on axe usage and faith.

They'll not only learn new skills, like the ability to heal other units, they'll continue to level up their lance usage abilities by using their original weapon on the battlefield. Then, once they reach level 30, they will be more equipped to take on a special master class. The tradeoff is that these units will level up more slowly than units that prioritize the same skills in both the classroom and during battles. The upside is that these soldiers will have a higher variety of classes they can choose from and be more versatile on the battlefield.

2. Cater your skills to your preferred class

Units can upgrade their class at a number of different levels. Beginner classes are available early on at level 5, intermediate classes at level 10, advanced classes at level 20, and master classes at level 30. Once a unit reaches one of these levels you'll be able to view all the classes and what they require in order for a unit to pass their respective certification exam. Units will also need seals in order to take their exams.

Once one character reaches level 30 you'll be familiar with all classes, so you can start assigning skills (through the goals menu) that go alongside that class. If you want someone to turn into a flying axe unit, then you'll want to focus on those skills early on.

3. Be sure to choose an adjutant that compliments a character's abilities

Adjutant units are a cool little feature new to the Fire Emblem series. Once your professor level is high enough (it increases through teaching and other activities at the monastery), you'll be able to assign adjutant units to your characters. There won't be that many though - I only had two adjutant spots available throughout my first playthrough.

When you do select someone to be an adjutant (units who aren't going into battle can be selected as adjutants), make sure their skill set compliments whoever it is they are joining. If you have a ranged unit, for example, be sure to pair them with another ranged unit. If you want to level an adjutant unit up make sure to assign it to another unit that will see a lot of action.

4. Buy special certifications in the market

A unit will need a seal in order to take the certification course for a new class. You'll get three of each seal: beginner, immediate, advanced, and master as soon as your first student reaches the appropriate level. A few seals can also be purchased each month at the market either during free roam or before battles.

Once you complete early game side missions you'll be able to bring in new merchants to the monastery. These merchants will have seals for special class upgrades, these will be useful for characters focusing on magic.

5. Build a team that matches your playstyle

This all comes down to personal preference, since you can direct characters to fill whatever role you want (although some characters are better suited for a specific role), but you should design your team based around you're preferred strategy. If you like to draw enemies out one by one by dangling units in their line of sight then you'll want to invest in powerful defensive units. If you want to be able to break your forces in two to pull off pincer movements then you'll want to have a good amount of well rounded units with strong movement abilities.