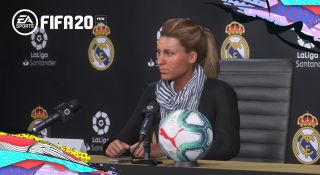 Fans of the single player mode have been crying out for some new FIFA 20 Career Mode features for some time now, because it’s stagnated somewhat for the last few years. EA has neglected the mode in favour of pursuing Ultimate Team, which is also receiving some brand new updates covered in our FIFA 20 Ultimate Team preview. When it comes to the managerial aspect of FIFA 20 however, EA has released some more information about brand new FIFA 20 Career Mode features players can expect this year.

Press conferences were in FIFA 19 Career Mode, but they didn’t really have much of an effect. Nothing you said mattered much and fan feedback was loud and clear that people wanted more interactions outside of the actual football itself that would have an impact on the career.

So for FIFA 20, both pre and post match press conferences can have an impact on player morale, along with your manager rating. When it comes to player conversations, a “messaging app-like interface” will be used and you’ll have to “deal with a variety of requests from players”, then “find ways, either through direct actions or by communicating his/her stance in order to mitigate and solve these situations”.

“The new tools developed in-house by the Career Mode team enabled our producers and designers to leverage this large amount of data and create an enormous variation of story-lines that are deeply rooted in the player’s experience and your way of playing. This means that the experience of each match will be treated differently by the ‘journalists’ and will always feel authentic and dynamic, depending highly on the outcome, goals scored, opponent, time of season or stage of competition, and more.”

All of this boils down to the new player morale system and along with it being influenced by conversations and press conferences, there’s a number of other factors like play time, wage expectations, and the team’s overall performance that will contribute to it. The result is altered attributes and stats in matches, so you’ll want to keep your players happy.

FIFA has made strides recently after it introduced women’s football in FIFA 16 and with the new FIFA 20 Volta Football mode, men and women can play on the same pitch together for the first time. While there’s not many women managing at the top of men’s football in real life, the option is now there in FIFA 20 as EA is pushing manager avatar customisation to the next level.

“The new Manager Career experience will provide the freedom to create an avatar that reflects your own style and see it reflected in game. Moreover, you will now be able to change your manager’s outfit at any moment during the season.

Another very important item to mention here is the ability to create both male and female avatars, this being another ‘first’ for Career Mode.

The third and final major addition to FIFA 20 Career Mode is dynamic player potential, which is essentially how a player’s potential changes based on how they’re performing. No matter how old a player is, their potential can increase if they;re playing well. With older players close to retirement, this is reflected in their attributes decreasing slower rather than them improving. Of course, this works the other way round too; if you’ve got a striker who can’t hit the back of the net or a defender who keeps making costly mistakes, you’re going to see their potential and attributes decrease.

There’s plenty of other smaller changes coming to FIFA 20 Career Mode this year, including live news screenshots and branded league UI themes, along with plenty of minor fixes and additions. You can check them all out in the FIFA 20 Career Mode Pitch Notes by EA, and make sure you’re up to date with all of the FIFA 20 icons coming to Ultimate Team.