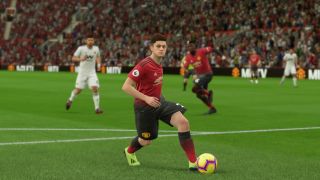 The FIFA 19 community is obsessed with Team Of The Season, where all the best performers of the 2018-19 campaign earn boosted end-game cards – but what about the FIFA 19 worst players? I’m talking 11 guys who won’t be getting FIFA 19 TOTS cards, and are highly unlikely to score you elite FIFA 19 weekend league rewards anytime soon.

It’s a highly curious concept, so I’ve turned it into reality. Below you’ll find the worst Ultimate Team you can build, with a curious twist that taps into another community obsession: FIFA 19 player faces. All of those below have genuine in-game headscans, so you know their likenesses are authentic even if their skills feel a bit Sunday League.

Note that this piece is in no way a knock on these players’ real-life abilities. They’re mostly good-to-great prospects just starting out, judged on one-moment-in-time videogame attributes. Before you laugh too hard, remember each would still run circles around you or I down the local rec.

A United States international at U17 and U20 levels, McIntosh has had a quiet MLS career – this is his third season in Portland but he’s yet to play a senior game. That lack of match time translates to some eye-poppingly poor FIFA 19 attributes: 55 for handling, 54 for positioning, and 53 for diving. His hair is at least spot-on.

Ryan Sessegnon has enjoyed a sparkling start to his pro-career, snaring Championship Player Of The Season honours during Fulham’s 2017-18 promotion season. Twin bro Steven’s start has been less rapid, with first-team appearances limited to the EFL Cup so far. His 71 pace rating in FIFA 19 is passable, but 56 marking and 51 sliding tackle aren’t stats to bank on.

Still listed as a West Ham player in FIFA 19, Pask recently signed for Coventry City after his contract with the East Londoners expired. He never played for the Irons but has started 15 games in loan spells with Dagenham & Redbridge and Gillingham. Pask may prevent some goals but don’t expect him to be banging any in: he has 38 shot power, 26 shooting and 21 finishing.

O’Shea’s FIFA 19 card is attached to Exeter, where he spent the 2018-19 season and clocked up 27 appearances. Yet he’s actually a West Bromwich Albion player who’ll be hoping to nudge towards first-team contention next season. Expect improvements on his ratings of 62 marking, 61 interceptions and 57 heading accuracy come FIFA 20.

Scanned for the FIFA series while a youth prospect at Southampton, Wood is another who recently moved clubs – his FIFA 20 card will be affiliated to Dagenham & Redbridge rather then Accrington. He’ll hope to fare better than last season’s four league appearances with his new club. Ouchee FIFA 19 scores include sliding tackle (56), positioning (53), vision (41) and finishing (31).

There’s a Dagenham & Redbridge theme developing here. Like Wood, Eleftheriou has just agreed a move to the Daggers after failing to make the grade in the Premier League with Watford. He knows Essex well after 18 games on loan at Braintree Town last season. Chief areas of work at his new club include crossing (51), vision (40) and free-kick accuracy (39).

This one seems incredibly harsh, and will surely be rectified come FIFA 20. Ratings of 50 for shooting, 53 for positioning and 44 for finishing do not feel right for a player who’s represented Portugal at every level from U17 to U20. Eight appearances and one goal in last season’s Premier League should see Quina get a big attributes leap come the new game.

One of Chelsea’s 73 million loanees, Maddox had a strong 2018-19 campaign with Cheltenham to the tune of 38 league appearances and one goal. Handy: the Blues’ transfer embargo may see him needed back at Stamford Bridge next season, so long as his FIFA 19 scores for ball control (58), long passing (50) and marking (30) turn out to be off-target.

Still attached to Swansea in FIFA 19, James is now much more famously known as one of Manchester United’s expensive, youth-focussed summer signings. He tore up the Championship last season, making a mockery of videogame ratings such as 63 dribbling, 56 crossing, 54 vision and 43 long passing. He’ll be going gold with an OVR of at least 75 come FIFA 20.

Contracted to Watford since being signed as a youth prospect in 2010, the Scotland U19 international has only ever played once for the Hornets – instead racking up loan spells at a staggering seven different clubs. He scored twice in 38 games for Rovers last term, perhaps confirming his in-game ratings for finishing (58), shot power (56) and volleys (50).

Like Dagenham, our FIFA 19 worst players XI has been cruel to Watford – Folivi is another Hornets prospect with attributes that sting. 64 for finishing, 59 for shot power, and 36 for volleys. He’s just signed on loan with Milton Keynes Dons for the second season in a row, where they’ll be hoping to see an improvement on two goals in ten league games last time out.