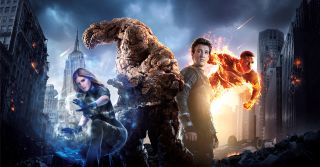 The sad tale of 2015's Fantastic Four is well-documented; Decried by director Josh Trank on the eve of its release, the movie - which had all the telltale signs of studio interference - was met with an overwhelmingly negative reception from critics and general audiences alike. Screen Crush reached out to Fantastic Four screenwriter Jeremy Slater to discuss what went wrong with the film, and their conversation yielded some interesting insights:

"In addition to Annihilus and the Negative Zone, we had Doctor Doom declaring war against the civilized world, the Mole Man unleashing a 60 foot genetically-engineered monster in downtown Manhattan, a commando raid on the Baxter Foundation, a Saving Private Ryan-style finale pitting our heroes against an army of Doombots in war-torn Latveria, and a post-credit teaser featuring Galactus and the Silver Surfer destroying an entire planet. We had monsters and aliens and Fantasticars and a cute spherical H.E.R.B.I.E. robot that was basically BB-8 two years before BB-8 ever existed. And if you think all of that sounds great…well, yeah, we did, too. The problem was, it would have also been massively, MASSIVELY expensive".

A part of me sees where Fox were coming from here; After two poorly received films, it's hard to fault the studio for not wanting to pay $300 million + to bring Slater and Trank's vision to life. At the same time, when we've gone from a "Saving Private Ryan-style finale" with a ton of "Doombots" to defeating a villain with Godlike powers with a single punch to the face, it's clear that far too many compromises were made. If Fantastic Four 2 ever happens - and if Simon Kinberg has his way, it will - here's hoping the studio learns from its mistakes.

Directed by Josh Trank and starring Miles Teller, Michael B. Jordan, Kate Mara, Jamie Bell, and Toby Kebbell, Fantastic Four is now available to own on DVD and Blu-Ray.