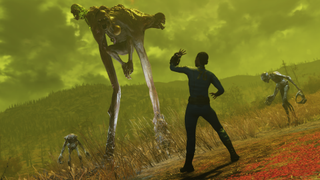 Fallout 76 Wastelanders is also set to introduce companions, an extension to the main quest, a variety of brand new locations as well as extra monsters to shoot and lots of new equipment to collect. Read on as we run through everything we know about the forthcoming update.

Fallout 76 Wastelanders release date - when is it out?

At its reveal during Bethesda’s E3 2019 conference, Fallout 76 Wastelanders release date was roughly the last few months of 2019. Unfortunately, the game has since been delayed. In an October blog post, Bethesda revealed that it was pushing the Wastelanders release date to Q1 2020, saying “we’re excited about how Wastelanders is coming together but it’s going to need more time to be the best, most polished update it can be.” Expect it to release fairly early in the year, hopefully before the end of the spring season.

Everything that arrives with the Wastelanders update will be free to those who already own Fallout 76 with no extra purchase necessary. The update is also arriving on all platforms - PC, PS4 and Xbox One.

If you’ve played the game you’ll quickly notice that Fallout 76 is lacking human NPCs, replacing them with recorded messages, terminal logs and robotic friends. This was a major disappointment for fans of the franchise at launch, so Wastelanders will remedy this decision by swapping in a number of human NPCs to interact with.

Wastelanders is the next step in the Fallout 76 story

It’s suggested that there will be a continuation of Fallout 76’s story with the Wastelanders update. The new NPCs rolling into Appalachia will be Settlers and Raiders and it will take place after the scorchbeasts (the terrible flying mutant monsters) have been banished. This will take shape in the form of a new main questline for Fallout 76 where you can take sides and incur consequences. It will introduce two new camps for each respective faction too, Foundation for the Settlers and Crater for the Raiders. Wastelanders will also supposedly reintroduce the ‘Cult of the Mothman’ in some capacity.

During the Quakecon 2019 Fallout 76 panel, the developers talked in more detail about Wastelanders, with the key takeaway being that the NPC dialogue will be “more like Fallout 3 than 4.” This is important as many were disappointed by Fallout 4’s more rigid, voiced system in comparison to Fallout 3, where players could make meaningful stat checks and have more options to deal with escalating situations. In Wastelanders your faction affinity and reputation will determine what options you have when speaking with NPCs, which should delight fans of the older games in the series.

One aspect of Wastelanders that has been fleshed out by Bethesda is the Watoga Underground, a new location in the southeast part of the map that acts as the underbelly of the so-called “City of the Future.” In true Fallout fashion, the Watoga Underground is a labyrinthine network of car storage stations that used to power the city above. In the post-apocalypse, the place is now decrepit despite a few shiny vehicles. If the screenshots are anything to go by, it also looks like the waiting area (where patrons used to get fast dining and haircuts) might be infested with raiders, specifically the Gourmands, a raider gang that was previously thought to be wiped out. Whether the sign is a remnant of past occupation or not remains to be seen!

Another welcome addition that harkens back to the days of Fallout 3 and New Vegas is the introduction of companions. Companions will be available within each of the new factions arriving in the Wastelanders update, and you’ll be able to romance them, complete side quests that concern their backstory and chat to them at your in-game camp. Unfortunately, you won’t be able to bring them with you on quests in the wild just yet.

We’ve seen a few glimpses of the new enemies and equipment arriving in Fallout 76 Wastelanders, including a massive Wendigo-esque creature - a mutated mass on long spindly legs. There’s also a trio of mutated flatworms that previously appeared in the first Fallout game, known as Floaters. New weapons will be available in Wastelanders as well as some new activities, including the ability to pan for gold in (definitely irradiated) water. Secret service power armour will also be making an appearance in the update, as well as a bow, a plasma caster and a series of gauss weaponry, including a minigun!