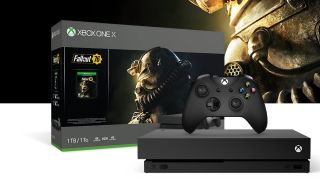 Looking forward to Fallout 76, Battlefield 5, and/or Shadow of the Tomb Raider and want the games to look as good as possible on console? Microsoft has your back. As part of its Gamescom 2018 livestream, the company announced two new Xbox One X packages will be hitting store shelves later this fall, each one including one of the most anticipated new games of 2018. You can check out the best Xbox One X bundle deals right here, but these ones are some of the best you'll see.

On Xbox One X, the game will support 4K resolution and HDR, plus some other, unspecified enhancements - in other games this has meant things like better lighting techniques or smoother anti-aliasing, but again, no concrete details on what Bethesda has planned for its multiplayer, post-apocalyptic sandbox with regards to Xbox One X beyond 4K and HDR.

The Xbox One X Battlefield 5 bundle is a bit fancier. It comes with a 1TB Xbox One X system and controller just like the Fallout 76 bundle, but this version has a unique gold-and-black color scheme. You'll also get Battlefield 5 Deluxe Edition, a copy of Battlefield 1943, and one month of EA Access.

Unlike previous games in the series, Battlefield 5 does not have a season pass, so the Deluxe Edition instead comes with paratrooper apparel containing weapon skins, camo patterns, head gear, and face paint, plus bonus Starter Assignments and regular customization items doled out weekly. On Xbox One X, it will also support 4K resolution, HDR, and other visual enhancements.

All three bundles will launch at $499.99 / £449.99 this fall. But don't be surprised if some holiday deals pop up shortly thereafter and you find them on our list of Xbox One bundle deals.

Can't make it to Gamescom but want to feel like you're part of the action? Be sure to check out the full Gamescom After Dark schedule and tune in.